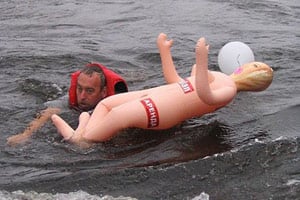 A participant in the annual Sex Dolls Rafting Tournament near St Petersburg was disqualified in shame for "sexual abuse of apparatus", Mosnews reports.

The event - held on the Vuoksa river and sponsored by "a number of Russian sex shops" - this year attracted 400 athletes determined to tackle the choppy 1,200 metre course with nothing more than an inflatable partner for buoyancy, as our pic shows.

As organiser, Dmitriy Bulaviniv told Zizn' newspaper: "It's fun and difficult to swim in stormy river with an exotic apparatus, as inflatable ladies slip out of hands."

Yes they do. According to Mosnews's entertaining commentary, as "strong wind and flow snatched out resilient dolls from strong men's hands", only 40-year-old Igor Osipov was left to make the final climactic dash to the finish line. At this point, however, "the jury then noticed Osipov's strange position and told him to moor. When he came out of the water, gazers saw signs of recent sexual activity on the swimmer's doll."

The mind boggles. The judges then "found the swimmer guilty of sexual abuse of the apparatus and disqualified him" because, as the organisers explained: "Air sex dolls can be used only for swimming."

We conclude by repeating what our correspondent Matt noted when forwarding us this gem: "I can't think of an IT angle for this, but I'm not sure I really care." We wholeheartedly agree. ®