Review Although the Orange SPV M3100 is a version of the HTC TyTN, Orange has come up with a better-looking design. That said, the two devices are otherwise identical. The black device with silver trim looks great and that's only the beginning of it, as this is a really terrific smart phone...

The SPV M3100 has taken all the good features of the SPV M600 and then gained some more for good measure. It has 3G and it supports HSDPA, although Orange has yet to launch its '3G broadband' service here in the UK. It supports video calls, but more importantly, it has a pull-out keyboard and a jog wheel. 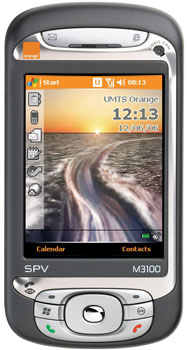 Slide the screen to the right and turn the SPV M3100 horizontally and you're set to go. The screen will flip automatically when you open the keyboard. They keyboard is quite good, but you can't touch-type on it. Some of the keys on the review model where quite stiff, which quite often meant I had to re-type words. But it's still possible to type at a decent pace and entering text this way is far superior to using handwriting recognition or tapping the on-screen keyboard. In any case, those options are there as well for when you just want to enter some information quickly without having to open the keyboard.

The front controls are similar in layout to the M600. The M3100 has a slightly different button layout although the same functionality is there. There are two buttons that correspond to the on-screen soft menus; a Windows button that opens the start menu; and an OK button. Below these are the make and end call buttons, and in the middle is a four-way navigation pad with a select button in the middle. A new add-on is the video call button, which is located to the top left of the other buttons.

Above the screen is a second set of controls that launches the messaging software and Internet Explorer. Just above the screen on the right-hand side is the video-call camera. The display itself measures 2.8in and has a standard PDA resolution of 240 x 320. It's about time that these devices start to get higher resolution screens as many other mobile phone manufacturers manage to squeeze this resolution or higher into their standard handsets.