Nvidia has quietly rolled out the GeForce 7100 graphics chip family at the bottom end of its GeForce 7 series of GPUs. For now, though, there's only one member - the 7100 GS - but at least three card companies have announced boards based on the part.

That yields a fill rate of just 1.4bn pixels per second. The chip can process 263m vertices each second.

Boards based on the 7100 GS fit into a PCI Express x16 slot and provide DVI and HDTV outputs. The cards are compatible with Nvidia's SLI multi-GPU technology. 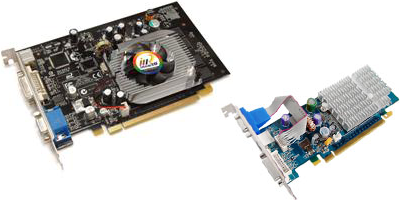 Among the companies who've already announced 7100 GS-based boards are PixelView, which is shipping a card with 128MB of memory expandable to 512MB using system RAM accessed by the chip's TurboCache technology. Sparkle announced a similar product, as did Inno3D. ®