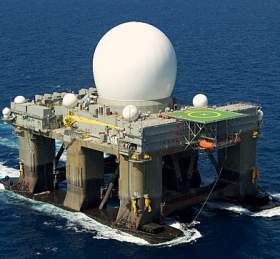 The future of the US's much-hyped, $815m Sea-Based X-Band Radar (SBX) platform is in serious doubt after a raft of sceptics expressed doubts that the sea monster could ever effectively operate in its intended final mooring off Alaska's Aleutian Islands.

The SBX - designed to detect incoming ICBMs - is currently wallowing in Hawaii after repairs necessitated by a light battering it received during its first ocean voyage from the Gulf of Mexico, Defencetech reports. Its eventual home is described by the Chicago Tribune as "unforgiving [stretch] of the Bering Sea where winter weather can be so violent that the islands have been nicknamed 'the birthplace of winds'."

"The bottom line is that the designers of this system didn't begin to contemplate the realistic conditions under which the X-Band would have to operate. When you look at all the facts, you really have to wonder what the people who designed this thing were thinking..."

The Chicago Tribune specifies some of the platform's shortcomings, as contained in an independent assessment:

The SBX was due to take part in the US Missile Defense Agency's (MDA) current "full-scale test of the fledgling US ballistic missile defense system", as The New York Times puts it, but rather missed the boat since it's unlikely to set sail "at least later this fall".

Victoria Samson, of the Centre for Defense Information, put the boot in with: "This is no surprise and again demonstrates MDA's stubborn refusal to accept that engineering and logistical limitations can be just as damning as anything else the weapon systems can come up against." ®