No MOT, no licence, no insurance, no eyes 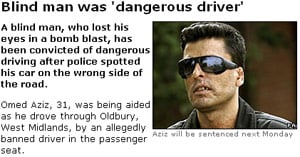 The BBC can award itself a "department of the bleedin' obvious" commendation for the headline adorning this piece yesterday concerning the case of 31-year-old Omed Aziz who was nicked while driving through Oldbury, West Midlands, while in possession of neither MOT nor licence nor insurance nor those most useful of driving aids - eyes.

Aziz, who lost said eyes in a bomb blast, appeared before Warley magistrates on a dangerous driving rap after reaching speeds of up to 35mph during a half-mile jaunt "aided...by an allegedly banned driver in the passenger seat".

Aziz and companion were stopped by police who noticed he was driving on the wrong side of the road. PC Glyn Austin told the court: "I attempted to speak to the driver, who appeared to be fumbling around with the controls. At that point the passenger leaned across and stated: 'He's blind'."

PC Stuart Edge magnificently continued: "I asked him if he could see me. He removed the dark-coloured sunglasses he was wearing and I could clearly see he was blind as he had no eyes."

Richard Knight, chairman of the bench at Warley Magistrates Court, concluded: "Mr Aziz was fully aware of his disabilities and we find the driver was in a dangerous, defective state."

Aziz had already pleaded guilty at a previous hearing to driving with no MOT, no licence and no insurance. In mitigation, he claimed "previous driving experience prior to being blinded" in his native Iraq. He will be sentenced next Monday. ®

Thnaks to Peter Kemp for eyeballing this one.