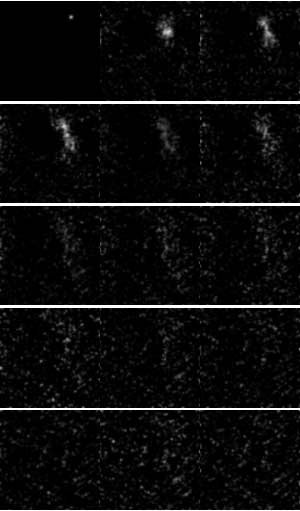 The first grainy images of SMART-1's lunar crash landing have been released by the European Space Agency, and suggest that the probe ended its days on the side of a lunar mountain.

The mosaic (right) is composed of fifteen infrared images taken by the Canada-France-Hawaii Telescope (CFHT) 3 September 2006. The sequence shows the flash and the dust cloud that followed the SMART-1 impact.

ESA knows roughly where the craft went down, but is trying to refine that using data from as many sources as possible. As project scientist Bernard Foing says, the lunar crash-scene investigation needs "all possible Earth witnesses and observational facts".

Early analysis suggests the probe landed on the slopes of a 1,500m high mountain, not far from the Lake of Excellence plains.

"It seems that some ejecta or debris made it across the mountain. This is good news to search for the ejecta blanket" says Foing. "We might also see the 'firework' expansion of gas and debris that has bounced after impact from the spacecraft."

The cloud of material travelled 80km from the crash site in just over two minutes. Foing says ESA is seeking help from the amateur astronomy community is making observations of the ejecta blanket: "In particular using visible or infrared imagery, or even to look at spectroscopic anomalies at the impact site," he added. ®

You can look at more images from the ground-based observation campaign here.

Customers 'becoming impatient' to get 'clarity' on the matter, says exec
Systems6 Jul 2022 | 6

Stop us if you've heard this before: Apple facing charges of anti-competitive behavior in the App Store
Legal6 Jul 2022 | 13

One market down on China's march toward tech self-sufficiency, a bajillion more to go.
Databases6 Jul 2022 | 2

Time to bone up on Hancom Office, the productivity suite that's big in Korea – and nowhere else
Software6 Jul 2022 | 13