Last week Wikipedia founder Larry Sanger announced his intention to create a counterpart, giving it the clumsy name of Citizendium.

This momentous event has been pored over by bloggers, newspaper columnists and egghead theorists, by the ... er. Well, perhaps as many as half dozen have weighed in.

(Maybe after being so thoroughly turned over by America's satirists, it's deeply uncool to even profess an interest in the fate of the baroque exercise in rules and procedures that's Wikipedia. In their right mind, who on earth cares?)

But for the record, we noticed that there had been no response from the guerrilla group at the heart of the vast bureaucracy that's Wikipedia.

(And even Kafka on LSD couldn't invent something called - seriously - "ArbComm") 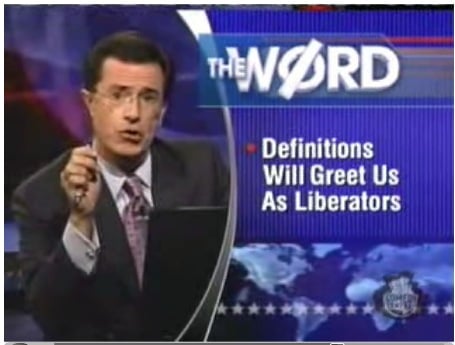 "Hands up for a Flat Earth?" US satirist Stephen Colbert explains the consequences of "voting for the truth"

Since March a number of comrades - many of whom have achieved the exalted rank of "Administrator" within the cultish organization - have been laying the mechanics of Wikipedia bare, for all to see, on a site called Wikitruth.info. If you'd bought into the cosy media myth that Wikipedia was a utopian scout camp of all the world's net nerds furrowing away over this stove called "knowledge", you need to have a look at Wikitruth. It's got the appeal of Spy or Private Eye, magazines where you cared less what the subject matter of what they were supposed than what they were really writing about.

If they can keep it up, Wikitrith may long outlive Wikipedia.

These communiques from within the heart of the bureaucracy describe personal betrayal, ethical conflicts, and downright surrealness - stories that have never been heard before. Even in Klingon. They're funny, tightly-written, and have a beginning, a middle and an end: not something that can be said for most of the articles on Wikipedia, the site they both work on, and mercilessly critique.

(Marvel, for example, at the sudden appearance of an attractive woman in the midst of the triddlers. Panic ensued - but an ingenious solution to the intruder was devised. This link is NSFW - you have been warned.)

Once you've read Wikiruth, it's hard to think of Wikipedia as anything other than an autistic care group for the obese and the underemployed. Especially after had one viewed its attempts to "do a good job" with a dispassionate eye.

Naturally, Wikitruth.info is considered such an act of treachery by Wikipedians that every link to the site at Wikipedia is rapidly removed. As the Village Voice observed, this neatly demonstrates the values of a site that boasts it gathers together all the world's information - except when that information is a (too) accurate critique of itself.

So, tentatively, we wondered if the Wikitruth people thought Sanger's new, new Wikipedia had a cat's chance in hell?

The fact is, Sanger is not a salesman. He's a scholar. Right now there's a lot of distrust of scholars and academics on the web as it stands now (an ironic change from when it was basically ALL scholars and academics) and so he's already suspect and in the cross-hairs. Combine that with the fact that he actually stood up to King Jimbo and suddenly he's some evil Lex Luthor of Elitism, trying to lock away the Wikipedia for all of time. This isn't accurate, but it's typical once people drink the Wiki-aid.

What he SHOULD have done is start with a core set of guys, hang out in a room, and then figured out the logistics. Suck down a copy of the Wikipedia, start playing with it, work out the interface changes, and what needs to be modified or redone or kept. THEN, after a while, open it to public beta or make the big announcement. Instead, Sanger basically said they'd have a man on the moon in 18 months and so everyone gets to go "I told you so" if he doesn't live up to that wildly stupid oal.

Sanger doesn't have Wales' ability to salesman his way out of anything. Wales travels, talks in passionate terms (truth, light, knowledge, heart), while Sanger sticks with dispassionate phrases (knowledge, experts, validation, review) that frankly don't sell well. Sanger needs a Wales. He has no Wales. As a spiritual head, he's no good for that role. He was once the Rove to Wales' Bush; now he's trying to be the Bush and he's going to creep people out, just like Rove would.

Another factor is that as has been proven by Wikipedia, people will not only happily eat a shit sandwich, they will actually attack and criticize other people who wonder why we're settling for shit sandwiches. It is very likely that Sanger's project, positioned as it now as (by Wikipedians) as an "anti-wikipedia" project, will be literately pummelled and DOS'd out of existence. That's less of an overall concern, but there's a good chance it will be seen that you're either on Wikipedia or Citizendium, not both. The potential for Arbcom members of Wikipedia to start blocking people who contribute to Citizendium is very, very high. It's gotten worse over there in the last six months, by the way.

Forking is an interesting term being applied to here, and while it's fun to use it this way, the fact is that comparing free licenses to the open source movement gets kind of stupid; if you write that Dolly Parton has 9 heads in Wikipedia, nothing really "crashes". If however, you suddenly decide that you need to allocate 10 megabytes for every character on the screen in your video game software, it WILL crash. So even though the license is free (increased contribution to the "commons"), the fact is, there's really no objective way to say "...and it works". It just exists. To this end, Citizendium is less a fork than a recompilation of existing information with improvement. Potentially, this could be the difference between the Phone Book and a Fodor's Travel Guide. On the other hand it could be the difference between a movie and a handheld camshot of that movie. Time will tell.

It's not every day you interview a collective identity - we missed Luther Blissett, and one day we'll get to interview Wu Ming.

Larry isn't the shameless sales huckster that Jimmy is, they conclude. But if you were sincerely starting a project to document your favourite subject, why the heck would you want QWERTY-enabled know-nothings from Hicksville to run the show? This utopian belief, that laid waste to Wikipedia in a matter of a few years, represents a problem for Sanger, too.

Wikipedia has lost a lot of contributors like me, for various reasons. Not least if I write research and research something I expect the copyright to remain with me not Wikipedia so on those grounds alone I'd never write for it. But like you rightly say the other problem its basically huge repository of lists about lists. It has sank under the weight of the trivial rubbish it maintains, endless pop-culture rubbish but nothing that makes it a real reference tool.

Similarly though I think MySpace is going to be the next major problem on the web. Already I've configured Apache to reject any requests from the myspace.com domain asking for image files as every MySpace cretin thinks its okay to hotlink images and I've heard quite a few webmasters having the same problem.

I think they've big contributor projects have had their day -- the whole point of the web is to avoid monolithic entities because one thing can link to anything else. I think smaller and more precise is the way forward, not megaprojects like Wikipedia where the management of them becomes a project in itself. We certainly don't need anymore crap-aggregators like Wikipedia, MySpace and Flickr, just better search engines...

That's a good point. For new 'net users the wide open infinite web (©Wired magazine 1994) has become a blob called Wikipedia/Google - served up by one anonymous corporation and distilled by an anonymous bureaucracy, and colored a dull brown, the color of mixed up plasticene, or collective intelligence at work. The life of the mind, of discovery and enquiry and discourse, now just take place elsewhere.

But just don't tell this to the US State Department. Wikipedia and its founder Jimmy Wales, it seems, is at the front line of the United States' War On Heathens.

Come on, Osama. Get stuck into our Arbitration Processes - if you think you're hard enough. ®