Everything on board but the kitchen sink 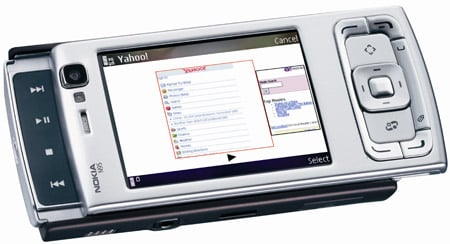 The Finnish phone giant stressed the N95's role as the multi-blade knife of mobile phones: "This single device - which fits easily in your pocket - can replace standalone devices that you no longer need, whether it's your music player, your digital camera, PDA or navigation device," Anssi Vanjoki, head of Nokia's multimedia division boasted. 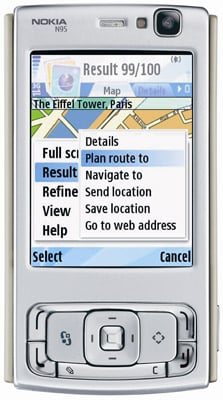 The N95 looks a little like Nokia's N80 slider phone, but the front moves down as well as up, to reveal dedicated music playback keys and the regular keypad, respectively. The phone sports a 2.6in 240 x 320, 16m-colour display backed by a dedicated 3D graphics chip - presumably one of ATI's, the result of the two firms' collaboration announced earlier this year.

The phone has built-in stereo speakers and a standard 3.5mm earphone-jack socket. It can take Micro SD cards for storing music and "DVD-like quality" movies shot on the five megapixel camera, which also boasts a Carl Zeiss lens. UPnP support allows content to be streamed to other devices.

The N95 runs the Symbian operating system and Nokia's Series 60 (S60) user interface. Its radio has GSM/GPRS/EDGE connectivity, along with UMTS 3G and HSDPA.