It's Reg vs Rollo

Do pets eventually resemble their owners? Or do owners get to look like their pets? It's heck of a conundrum - but one we might now be a little closer to solving. For the past fortnight it's been hard to escape the animated faces of "Joan", or "George" the graphical representations of what we're told is a new breakthrough in Artificial Intelligence. TV and newspapers, both highbrow and lowbrow, have flocked to report on the chatterbot. You can talk to Joan (or George) - the output of the British software project Jabberwacky - and think it's human!

For when we looked at the actual transcripts, the results didn't quite seem to match up to the hype. All Joan did was avoid the question, change the subject, and attempt to unsettle the interrogator with random insults. Here's a sample.

Judge: So what you're saying is that you are not just human but THE smartest human?

Joan: Yes, why, what did you think I was saying?

Judge: So what is two plus two?

Judge: Is it possible for two plus two to not equal four?

Joan: I don't know. Do you think it's possible?

Judge: How many degrees in a triangle?

Judge: Is it possible for more than 180 degrees to be in a triangle?

Joan: Probably not. You can change your opinion, but not your constitution.

Judge: It's not a question of opinion, it's a matter of physics and maths.

Joan: A five-ounce bird could not carry a one-pound coconut.

Yes, it's what we've got used to after going twenty minutes with Larry Lessig - but there's a sterner test - does it resemble a human being?

Jabberwacky's creator Rollo Carpenter seems to think so. He confidently predicts that chatterbots such as Joan (or George) will be indistinguishable from humans (or Larry) by 2016. 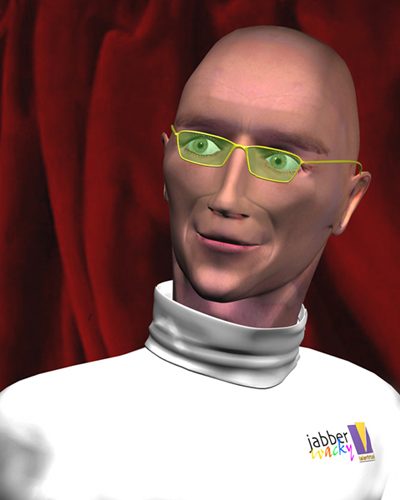 After our story, Rollo leapt to the defence of his creation, and "Artificial Intelligence" in general, via email.

He seemed human - thoughtful and quick to respond, if a little eager ... and cagey.

So now was the time to put our pet vs. human hypothesis to the test. Was Rollo really as obnoxious and evasive as Joan? There was only way to find out. We had to interrogate the Artificial Intelligence programmer himself.

Next page: Man vs Pet
Page: