The Archers in your pocket, in 1s and 0s

Review The MiniDAB is slighly smaller than early iPods, and while it's very much lighter than the Apple device - it feels like it's missing the battery, even though it isn't - it has none of the iPods looks. Apart from the iPod-like black and white colour schemes, the MiniDAB has a rather 1990s look about it: simplicity is out, complexity is in - presumably to imply a large feature set.

The display is a monochrome seven-line LCD. Above it sits the voice-recording mic; below it sit Mode, Timer and Rec buttons, and the MiniDAB's main control cluster. At the bottom is the unit's speaker grille. The control's a circular four-way job: push up or down to skip through recordings, and left or right for rewind fast-forward, and to call up the station list in DAB mode. At the centre is the play/stop button, and surround the navigator are four further keys: Menu, Delete/Back, Info and Repeat. Alas, these four don't extend a full quarter of the way round the wheel... 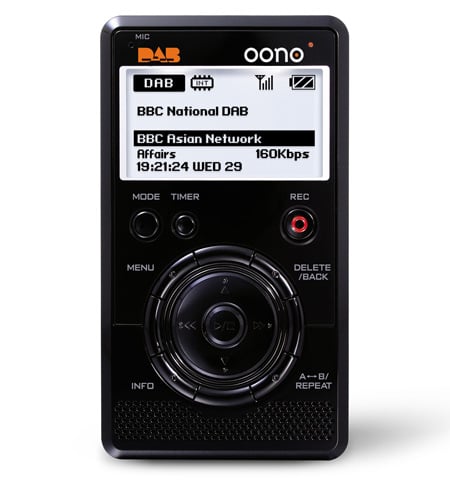 On the left-hand side of the device are the volume control, Hold switch and recessed reset button. Roung the other side, you'll find the line-in, 'phones and SD card connectors. There's a mini USB port on the bottom for charging and file transfer. The port has a cover, but it's not connected to the player so expect to lose this sooner or later.

The shiny black MiniDAB fits snuggly in your hand, but the all-plastic casing has a cheap feel that's exacerbated by the way the buttons rattle. It has the air of an early, no-name MP3 player, and the look of one too.

Powering the device up puts you into MP3 player mode. There's 128MB to 2GB of built-in memory, depending on which model you choose, and you can add up to 2GB more using the aforementioned SD card slot, which also has a cover, this time attached to the player. I was sent the 128MB unit - enough for two or three albums if they're short.

Welcome to the real world, kids. And for the rest of us, a future at which Meta is gulp! – better at large-scale analytics
Databases27 Jan 2023 |

Pinging search services in the US, China, Russia perhaps not ideal for privacy
Personal Tech26 Jan 2023 | 28