With a claimed insertible length of 5.5in - I can see the TOY boy's face fall - this is one way to really "rock your body", as OhMiBod lubriciously puts it, which add: "The combination of listening and feeling your music quickly transports you to a place where music, mind and body come together to create an unbeatable sexual experience."

The smooth tool comes with its own drawstring bag and an earphone adaptor to allow you to listen in while you self-love. Fancy something more, shall we say, veined than the OMB411's shiny white surface? Then UK supplier Bedroom Pleasures has a suitably priapic plastic sleeve to slide it into.

It's even offering a garter which looks not unlike Apple's own iPod Nano gym-friendly armband. Well, it's a kind of workout, I suppose... 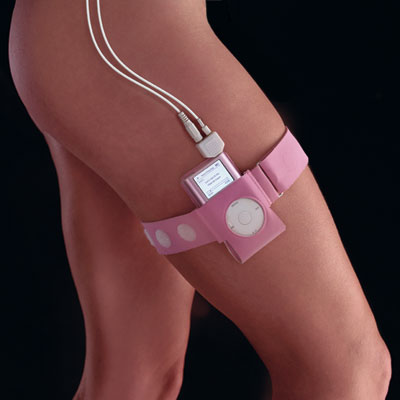 The OhMiBod OMB411 is available now from Bedroom Pleasures' website for £45. ®