Management consultants on the march

In an expensive attempt to stake a claim in Private Eye's Psueds Corner, Massachusetts Institute of Technology has announced a "Center for Collective Intelligence".

The center is headed by luminaries from the Wharton School at U Penn., and MIT's Sloan Management School and brings in guessperts from the cognitive science faculty. The timing could be better - MIT has been under fire for cooking its research results

But the first words of the new center's mission statement indicate that the venture is more faith-based than reality-based.

"The recent successes of systems like Google and Wikipedia suggest that the time is now ripe for many more such systems," claims the Center.

Er, ... "Success"? If this is the same Google that's fighting a battle with click fraud and junk websites (and diversifying its business appropriately), and the same Wikipedia that's become a staple of late night TV comedians' jokes, then we're in trouble.

And if you can't trust the diagnosis from these management consultants, how can you trust their prognosis, either?

Well, you simply need faith - and lots of it.

Even the best-read prophet of "collective intelligence", journalist James Surowiecki, cautions against a hype he helped create. A fan of prediction markets, Surowiecki discovered only a rare alignment of circumstances could ever provide something useful, and he hedged around the tricky subject of gaming and capture - perennial problems for Google and Wikipedia respectively.

Linux gets namechecked by the CCI as an example of collective intelligence. But Linux isn't a "crowd" at all - it's a tiny meritocracy of highly-skilled programmers employed by large corporations, or in some cases, universities.

Nor is what emerges from the other examples usually cited "intelligence", but a kind of collectively-agreed risk hedging. When the vaunted "wisdom of crowds" is applied to creative endeavors - such as product development, the creative core of many businesses - the result looks like the brown lump of Plasticene in a kindergarten activity box. The work of many will typically be blander than the work of one, or a small and focused team. You may have heard of the iPod.

Much of this thinking (if we're to be generous) isn't new - and where it's new, it isn't very good.

So-called "bottom-up" empowerment rhetoric espoused by gurus such as Deming and Peters is misguided, history professor James Hoopes points out in False Prophets, a book about management consultants. And the answers you get are only as good as the questions you ask, points out Jaron Lanier.

"The value [of the internet] is in the other people. If we start to believe that the internet itself is an entity that has something to say, we're devaluing those people and making ourselves into idiots," wrote Jaron Lanier earlier this year, discussing the mania.

Still, there's a lucrative market to be gleaned from a business class that spends its spare cash at airports on management classes such as Who Moved My Cheese?. "Sell Air, Not Haircuts to Succeed," advises the CIC chief Barry Libert in his latest blog post, and he appears to be as good as his word.

With that payday in mind, the MIT's Badger School already has a book project in mind - insultingly titled We Are Smarter Than Me - and you may be the next victim of the revolution. 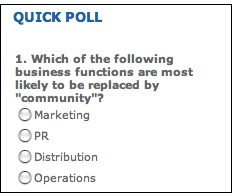 And we naively thought operations people, like BOFHs, keep companies running. No, the BOFHs need a dumb collective to tell them to do their job better than they already know:

"By developing theories to explain all these things [our emphasis], we can help network professionals and others understand new ways of organizing themselves that would never have been possible before but that may be far more efficient, flexible, and innovative than traditional ways of organizing."

So here's a quick poll for you.

Which of the following functions performed by "collective-intelligence"-toting management consultants would you cut first?