When Borland got shirty

In fact, the knights involved turned out to be most courtly and honourable; the accusations demonstrably and provably false. However, another myth surrounds that self-same conference which says that a totally different group of Microsoft employees (in no way connected to the honourable techies above) were indulging in stratagems and subterfuge. In the end, their actions left Borland founder Philippe Kahn with no alternative other than to deploy the Hawaiian shirt protocol...

Back in 1992 Borland was king of the database market on the PC. It already owned Reflex, Paradox and had just bought its main rival Ashton Tate, which owned dBASE – the best selling database product of its day. Microsoft, in contrast, had no mainstream database product but was interested in (and buying) FoxPro.

So Borland's DevCon in Palm Desert was the database conference of the year. It was held in a hotel and the myth goes as follows:

Some Microsoft employees booked into the same hotel for the same week. They were on a mission. Their target wasn't the conference itself but the speakers. Borland had recruited the cream of the database world (including some FoxPro gurus) to speak at its conference. The Microsofties certainly couldn't stop them speaking at the conference, but they came up with a plan that seemed to guarantee the maximum damage to Borland's prestige and yet was completely legal. They simply invited all the speakers out to dinner on the last night of the conference.

Think about it for a moment. It's the perfect slap in the face. You are Phillipe Kahn, CEO of Borland. You have just bought your biggest rival and you have just run the biggest DevCon in the World. The only missing elements from your final celebration are the stars of your conference crown. And Microsoft could say, with perfect honestly, "but all we did was invite some guys out to dinner. What's the problem?"

The myth goes that Phillipe found out about this on the morning of the last day of the conference. He was well aware of the elegant trap into which he had been pushed fallen. There was no way he could forbid the glitterati of the database world from going out to dinner. To even suggest that they shouldn't do so would make him appear petulant and childish. And yet to allow Microsoft to swagger off with his cherished speakers was also inconceivable.

In a brilliant piece of lateral thinking, Philippe decided to ensure that they staggered off instead. By the afternoon he had somehow managed to acquire 3,000 Hawaiian shirts (logistically a major coup) and enough alcohol to sink a battleship. He then calmly stood on stage and announced that there was to be an impromptu party for all of the delegates. Everyone got a free shirt, the drinks were on the house. He, personally, had invented a new cocktail in honour of the conference. Well, speakers are human too, they like free booze. It was a great party and it started at 5pm. In two hours it is possible to consume a large quantity of alcohol.

At the appointed time, the Microsoft suits turned up with the stretched limos ready to escort the most important database thinkers of the day out for a sophisticated evening at a very upmarket, expensive restaurant. They were expecting a set of dignified luminaries. What they got was a bunch of drunks in loud shirts. The myth goes on, in some detail, about the effect of the somewhat softly sprung suspension of the limos on the digestive composure of the speakers, but I leave that, gentle reader, to your imagination.

So much for the myth, what of the truth?

Well, the party was certainly held. As absolute proof, I offer a picture of the shirt, which I still have. 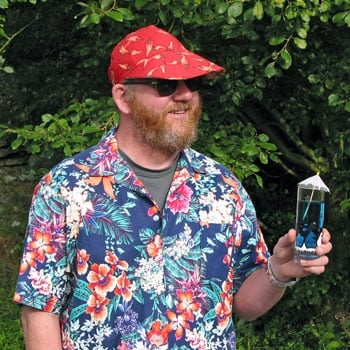 I think that all right-thinking people would agree that this constitutes proof that the shirts were given away; no-one in their right minds would actually buy a shirt like this for themselves.

And it is also clear that Microsoft did take some of the important people out to dinner. For a start, I talked to one of them at the time.

There are also other contemporary records - Lisa Slater Nicholls mentioned it in FoxTalk (July 1992):

Microsoft held a special dinner in Palm Desert at the conclusion of Borland's DevCon. When I remarked that this could be viewed as evidence of a somewhat rapacious competitive instinct, Liz Sidman, one of the dinner's organizers, demurred. "Not at all," she said, "we're just using every opportunity available to us to gather input from the Fox development community."

Given that both the dinner and the party took place, it seems likely that the rest is, at least in essence, true. But were any readers privy to the conversations that actually took place? Does anyone know where Philippe managed to get so many shirts at such short notice? Did the limos really require re-upholstering? Let us know. ®