Letters MIT's news Center for Collective Intelligence faces an uphill battle getting its cosmic crap turned into viable management consultancy. Or so say Reg readers, who have their own remedies for the New Age junk science crowd. The "collective intelligence" crowd now wants to unleash the power of consultancy on companies, and suggested which departments could be cut first. The list included operations. So instead, we wondered which management consultant functions companies might want to dispense with first – and threw the vote open to the "hive mind" of the Reg readership. This is what you told us.

Beheadings, throat-slitting and electric shock treatments are all practical suggestions for ridding companies of these "players of the pink oboe" (thanks to Nick P. for that one).

The useless blog and wiki software is a great idea ... it keeps the hive minders busy planning and discussing where to take me for the next "really long expensive lunch"®.

The presence of the Wharton and Sloan management schools is telling. Business schools love to assume the authority of science while avoiding the rigours of quantitative reasoning. Data are boring to the executives that are paying to be entertained and flattered while they polish their resumes. And data might falsify the theories.

A couple of heretics at Harvard Business School do a job on the whole sorry racket in their book, reviewed here.

To answer the Institute of Fact-Swervers own poll, it will, of course, be marketing and pr that get 'replaced by community'. It's a commonplace that web shopping shifted the burden of data-entry onto the consumer (Amazon has a POS terminal on my desk). So, offload the costs of marketing and pr; get consumers to advertise to themselves and each other.

Kafka was, as ever, there before us:-

'The animal wrests the whip from its master and whips itself in order to become master, not knowing that this is only a fantasy produced by a new knot in the master’s whiplash.' - The Third Notebook, November 21, 1917.

A group of Collective Intelligence-enabled consultants await their fate

All this stuff reminds me of the “Quality Circles” movement (I was a Quality Control Engineer and Manager during its heyday). W. Edwards Deming was NOT a fan of that, although his approach to Statistical Quality Control did attempt to give the operator more control over his/her work. Deming’s premise, though, was that technical staff would use the collected data to improve processes, making it easier for a worker to produce good parts. Joseph Juran, the guru of Quality Assurance, advocated a top-down approach (a little too cutely called “Breakthrough”) that assigned small dedicated teams of skilled people to identify and solve problems.

"Collective-intelligence" (or collective decision making) is bullshit. A half decent dictatorship will beat the hell out of a democracy for efficiency any day, so why the hell would you turn a business dictatorship (or oligarchy if you will, which in practise is what you have now) into some kind of pseudo democracy when the aim is to make money in the most efficient way possible? Democracy might be the best of a poor bunch (thanks to WSC) at trying to let everyone have a say in where we are collectively heading as a society, but that is not what we are trying to do in business.

If you look at the most successful companies (and that's the best measure of what has worked so far), you may find they listen to their employees, customers and shareholders etc, but the directions and decisions are always made by those in charge, not the great unwashed masses. Democracy (or "collective intelligence") it ain't.

And the All-Hands meetings.

And the achingly-awful Kickoff Events.

And the Team Award lunches at chain pubs with plastic menus.

And the Rate Your Colleagues in a League Table assessment exercises.

All of the above; but especially the badgers! Haven’t they heard of Bovine TB ;)

Does that leave them anything else to do? Ah yes meetings.

When I was a consultant the collective noun was a 'wallet' of consultants.

I think the correct response to a proposal from one of these 'guru's' would be something along the lines of 'Gee, we really need to talk to all of your competitors as well, you know, to get the collective wisdom on whether we should hire you'.

Thanks for another sane article.

MIT's _real_ engineering departments are world-class. And when I say _real_ I mean people who know calculus, not "computer scientists". The AI Lab and Media Lab exploit MIT's reputation to peddle junk science and suck up grant money.

A camel is a horse designed by committee.

Too many cooks spoil the soup.

Individuals are smart, people are stupid - K, Men in Black.

All religion, politics, pop music, fads and the wars, waste and suffering resulting from these (cultures) are the product of a collective mind.

The Soviet Union, China's cultural revolution, Cambodia's killing fields and Nazism are all the result of a collective mind.

Observation will show you that nothing worthwhile has ever (and many extremely bad things have) come from "collective-intelligence". This has been the basic truth of human existence for all time.

Now onto the results. Over a hundred voted, but only one vote came in to cut "long and expensive lunches". Fair enough. Teambuilding and "useless blog and wiki software" tied with nine votes each. But the overwhelming majority voted to see this cosmic class of non-productive labour banished at once. 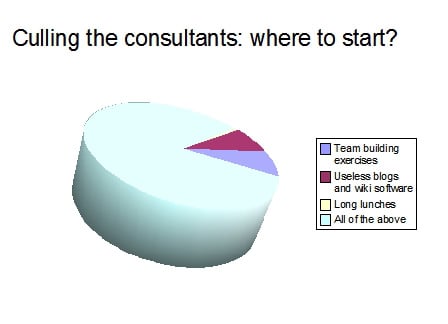 So take that, MIT. Our "collective intelligence" is a lot better than yours. And it carries a big stick. ®

Bootnote: Having taken Wikipedia from the obscure margins of the internet to the butt of prime time TV comedy, Jimmy Wales has raised $4m for a private venture to persuade companies to use more wiki software. We note that Wales also makes up 50 per cent of the MIT CCI "Advisory Board". We're sure he'll be giving the best advice he can.