Astronomers using the Hubble Space Telescope have snapped the most detailed image ever of a pair of colliding galaxies, known as the Antenna galaxy.

The galaxies are the nearest merging pair to Earth, and the youngest too: the collision began about 500m years ago. As the two galaxies smash into one another, they create ideal conditions for new stars to be born. And new stars are forming in their billions. 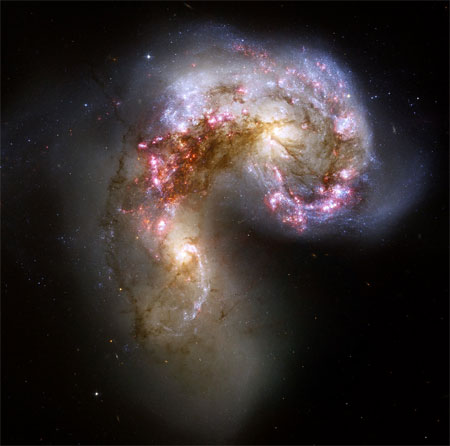 So what are you looking at in that picture? (For a larger image, click here.)

Well, according to the NASA boffins:

"Nearly half of the faint objects in the Antennae are young clusters containing tens of thousands of stars. The orange blobs to the left and right of image centre are the two cores of the original galaxies and consist mainly of old stars criss-crossed by filaments of dark brown dust. The two galaxies are dotted with brilliant blue star-forming regions surrounded by pink hydrogen gas."

The new images from Hubble are helping astronomers sort out which bright spots are what. For instance, the brightest blobs are the biggest and most compact clusters, known as super clusters. But some of the bright spots are also solo stars.

The majority of the super clusters will eventually disperse, adding their residents to the general background of the galaxy. Some, around 100 of the very biggest, will manage to stick together, forming globular clusters, like the ones in our own Milky Way galaxy.

Speaking of the Milky Way, it is worth noting that the astronomers are also watching this collision to get a better idea of the fate that awaits our own galaxy, which is likely to collide with the (cosmically) nearish Andromeda galaxy in about six billion years time. ®