RoTM What must be the most high-profile Lizard Alliance attempt yet to wrest control of Planet Earth from its current human masters came earlier this week when Turkish prime minister Recep Tayyip Erdogan was temporarily captured by his armoured limo.

According to local neoLuddite Resistance Army (NRA) operative H Turgut Uyar, Erdogan suffered an attack of hypoglycemia while in his motorised fortress and was duly rushed to hospital. Upon arrival, however, his bodyguards and driver panicked and leapt from the vehicle leaving the keys in the ignition - instantly activating the car's central locking system.

As Erdogan lay unconscious in the back, staff battled for 10 minutes to break the car's armoured windows, eventually succeeding using a chisel and sledgehammer borrowed from a local building site. Erdogan made a full recovery after nine hours' treatment, while the Turkish press expressed bewilderment at the incident.

One government spokesman is quoted by Anatolia news agency as saying: "Preliminary work is underway to determine why and how the incident occurred. Depending on the outcome, a investigation will be launched if necessary." The finger of blame has, inevitably, been pointed at the driver and bodyguards, but we know better. World leaders can consider themselves duly warned. 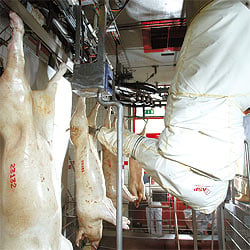 In Germany, meanwhile, the question as to what fate awaits those humans who survive the Rise of the Machines™ and are not required by our lizard masters to work as slave drones in the CyberDyson factory, may have been answered by Oxford NRA cadre member Jamie Boyle. He reports a robotics company has carried out successful field testing of advanced pig-gutting robots which have chillingly allowed porker processing outfit Westfleisch eG to increase the efficiency of the vital rectum removal and pelvic bone cutting processes.

The first robot in the line, a KR 30 equipped with a double shackle, cuts off the pig's front feet at a defined position. The second KR 30, suspended from the ceiling, uses a special cutting tool to remove the rectum. Following a renewed 3D laser measurement, a KR 60, also installed in the inverted position, breaks the pig's pelvic bone with a cutting tool resembling a cleaver and scores the abdominal wall. The second KR 60 pulls the abdominal wall of the carcass forwards with a pin and opens the belly and chest with a circular cutter. The sternum is cut completely and precisely through the middle.

There's more on KUKA Roboter's "medium payload" robots - including the KR 30 and KR60 - right here. Suffice it to say, since the pig-gutting system is controlled via a "control panel with familiar Windows interface", and despite the company's insistance that Westfleisch has not "shed a single member of the workforce" as a result of the automation, it's only a matter of time before the robots spontaneously go into "blue screen of death" mode and decide to "shed" a few workers themselves. ®