The Shuffle's fractionally wider than the Nano and about the same depth, though its built-in belt clip doubles the effective depth. It's made of the same aluminium as the Nano. With the player's controls facing you, the earphone socket is on top, alongside a green status LED, while the power switch and the repeat play/shuffle switch are on the base - next to a second green LED. Like the first-generation Shuffle, the new model has no hold switch. Instead, you press and hold Play for three seconds.

Having two separate switches is a big improvement over the old Shuffle's single, three-way slider switch. My Shuffle is almost always used for sequential playback, but it was a little to easy to push the slider too far and accidentally start shuffling. The new Shuffle's switches are raised above the casing not flush with it as was the case with the old shuffle. Again, this is a real improvement. 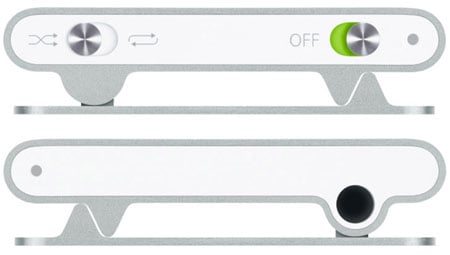 Another refinement: the belt clip. This will snap onto clothing flaps and pockets, bags and other kit with ease, making the Shuffle feel like little more than a remote control unit for a larger iPod. The clip's neither too stiff nor too loose - just right, in fact.

Which pretty much covers its functionality too: play or pause, volume up or down, track skip and play mode. Once again, less is more, just let the music come to you, in order or at random.

iTunes provides access to the player's settings, in particular the maximum volume setting and allowing the Shuffle to be used as a USB Flash drive, though the dock requirement limits its usefulness in this role. Once again, you can opt to auto-convert transferred songs to 128Kbps AACs, to get more into the 1GB memory.

The new Shuffle supports all the usual music formats, though unlike the other iPods it doesn't like Apple Lossless files. That's not a size issue - it'll happily work with uncompressed AIFFs - but presumably the Shuffle lacks the processing power to decode them.

There's only one size available - 1GB - and one colour - silver. So what, it's still a great gadget and a worthy successor to the original Shuffle. The lithium-ion polymer battery takes up the bulk of the Shuffle's interior space to deliver around 12 hours' playback time, which isn't at all bad for a device like this. 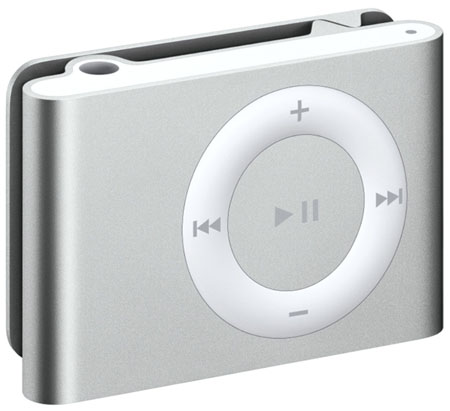 By that I mean a player for the more casual listener or as a handy grab-and-go unit for someone who already owns a high-capacity iPod. The capacity favours using the Shuffle for listening to a handful of new albums or holding a heap of favourite tracks. Either way, you're not too bothered about choosing what you're going to listen to. If you want that, buy a Nano or a video iPod.

The iPod Shuffle evolves. The simplicity of the original is augmented with an even smaller case that feels like the remote control of a larger player. It's let down only by the need for a dock - and a unique dock at that. The Shuffle's not for everyone - plenty of people will prefer to select their songs on a screen - but it remains a great grab-and-go gadget for music on the move.