Then there's the question of a test platform. Naturally we wanted to use the Intel Core 2 Extreme QX6700 processor but that limited us to an Intel chipset and we're forever hearing from Nvidia that Intel can't do PCI Express to save its life. Turning to the reviewer's guide once again we are told to "please use an nForce 680i motherboard" - an unreleased product as yet - so it's a shame that the hardware isn't available. 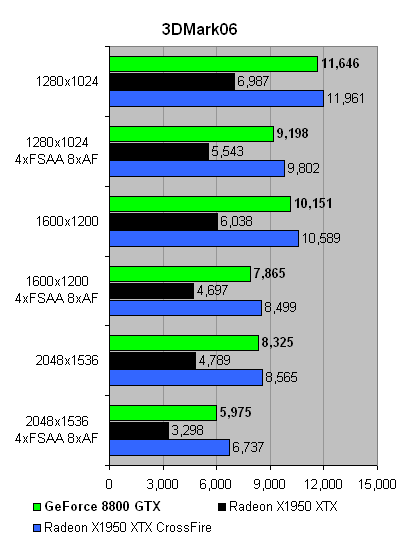 In the end I opted to run the Core 2 Extreme QX6700 on an Intel D975XBX2 motherboard with 2GB of Corsair XMS2 memory and a WD150 Raptor hard drive running Windows XP SP2, which means I'll have to build an Nvidia test rig to give GeForce 8800 GTX SLI a run in a week or two.

Anyway, a far bigger consideration is that we can only give this DirectX 10 graphics card a severe work-out under DirectX 9 and Windows XP, as we don't yet have any DirectX 10 software to run on the release candidate of Windows Vista. Not only are we testing a 2007 graphics card with 2006 software, but there is the huge unknown of the impact of DirectX 10, which is supposed to shift a large part of the general graphics workload from your CPU and dump it on the GPU.

Once the 8800 GTX was running, the first impression is that the enormous cooler works superbly well and is incredibly quiet. The fan is 72mm in diameter and stands some 20mm tall, so there's plenty of blade area. Throughout our testing the temperature didn't budge above 65° and the noise level was utterly negligible.

Our second observation is that the drivers - version 96.89 in the box - support both High Dynamic Range (HDR) and anti-aliasing (AA) at the same time on the 8800 GTX, and the AA settings go all the way up to 16x Q, thanks to the new Lumenex engine. Clearly Nvidia expects great things from the GeForce 8800 GTX so it was time to see it in action.

Running 3DMark06 on default settings we got 11,606 marks which only dropped to 9,080 marks when we enabled 4x AA and 16x anisotropic filtering (AF). Overclocking the quad-core Core 2 Extreme to 2.92GHz made no difference to 3DMark06. More surprisingly, when we overclocked the GeForce 8800 GTX to 626MHz/1,900MHz the scores barely changed.