BBC's Horizon gets serious - we have pictures

The show is over, but the malady lingers on

Letters You're still appalled, and amazed, that the BBC recently handed over its flagship TV science show to cranks and New Age nutballs.

This week's show was even worse - if that's possible. But here are more of your letters:

Just read your letters page. Did BBC's horizon really claim that a computer equal to the human brain might come around in 20 years?

Given that one of the world's biggest, richest companies takes five years of frantic work to get a facelift and a few bells and whistles on it's aging O/S, I'd say that is verging on the ridiculous. Let's hope the artificial brain doesn't need a new database file system eh?

Thank you for saying what needed to be said about that awful Horizon program.

Well there were a couple of interesting points: the radio-controlled bull and radio-controlled rat sequences demonstrated just how much electronics has been miniaturised, although there was apparently no advance in neuroscience. I laughed out loud at the scientist scanning slices of rat brain in order to model the neurons in a huge IBM multi-processor comuter. He had been doing it for many years and still had a "couple of years" to go. Even if he finishes before his computer is obsolete, just what did he think would be the outcome? Is the machine going to ask for cheese?

This week's Horizon about an autonomous vehicle race was actually rather good. It was a bit like Scrap Heap Challenge for PhDs. The programme explained the principles of the winner's vision algorithm, simply, cleary and without being patronising. There were no pointless analogies, they just told you how it worked. The effect was only spoiled at the end when the credits gave away that it was a Nova production with "additional material" (presumably re-recording the narration in a plummy accent) by the BBC.

May I suggest that you collect all the feedback you have had on this and forward it to the BBC? I looked at the Horizon website but there was no opportunity for feedback there. Instead I got distracted by some clips of an early 80s Horizon featuring Richard Feynman just talking about science, not a pop video in sight. Oh happy days!

Jeremy Scott said : "Even the New Scientist is dumbing down". Wrong tense. It dumbed down over ten years ago when it stopped illustrating articles with relevant pictures and employed graphic artists to decorate the pages instead.

Cheer up, Colin. At least Nature remains a bastion of integrity - unwilling to give sacrifice its reputation by giving credence to New Age techno-mysticism?

So moving swiftly on then, we even got an email from inner space:

Just visiting this planet, but I'd say Horizon is doomed when its most vocal defendant hasn't watched it.

But then a pause for thought when said defendant wonders "how does anybody know that the singularity hasn't happened already?".

Conventional wisdom has it that the past is the easy to predict tense, the future less so. I'd say the last few million holdouts that have their head screwed on straight *all of them* know that the singularity hasn't happened already.

Now, 'tis the lord's day today so let me go back to my altar for the Invisible Pink Unicorn, may her pointy hooves crush all dissenters.

Yes, I know that listening to BBC Radio 4 is a minority taste, but what of it? It's got lots of examples of high quality BBC science programming - thus giving the lie to the idea that BBC science coverage is all useless because no-one at the Beeb has a clue about science, which seems to be the line taken by the ignorant folk whose opinions you chose to publish.

I agree about Horizon, I have given up on it. Why do they persist on the amateur dramatic *reconstructions*. BUT I will stick up for their Material World prog on Radio4. The presenter is a bit cheesy jokey but content is wide and interesting.

Ross Aitken noticed that the only support for Horizon that we printed was from a nutter - and wondered if we'd slanted our mailbag.

Not at all, Ross. Two nutters supported Horizon - and we picked one.

Only just caught up with your excellent article on Horizon. You may well already have seen it but someone else has had a pop at the show, this time in relation to the "talking with chimps" episode featuring Danny Wallace, at <http://asadodo.blogspot.com/2006/10/intelligent-science-programmes-on.html>http://asadodo.blogspot.com/2006/10/intelligent-science-programmes-on.html . Bring back QED

Finally, thanks to Steve Pugh, who offered us this sneak preview of next week's show.

It's getting back to serious science - as you can see: 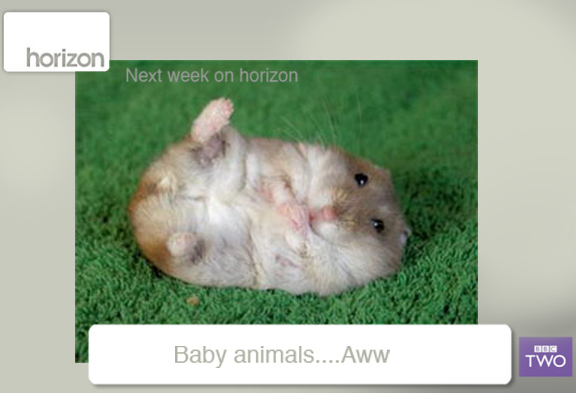 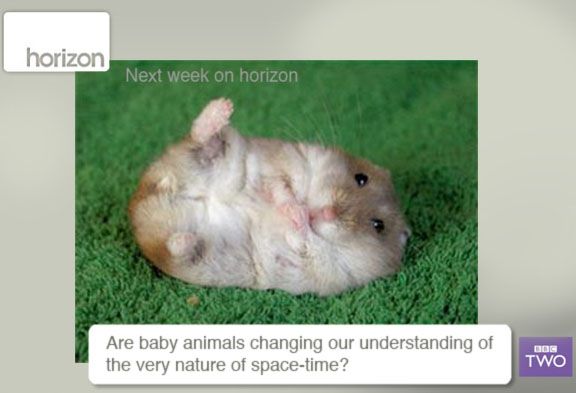 All Horizon-inspired artwork and programme ideas are welcome here at Vulture Central. You keep the © of course - so you can sell the idea to the producers in time for the next series. ®