Good old young Larry will give up on the marketing machinations and buy Red Hat once he discovers that maintaining a Linux fork is too damn hard, space cadet Shuttleworth tells us.

"I think it's great that Oracle has entered the Linux market, but the specific tactic they have chosen is going to be very impractical," Shuttleworth said, in an interview with The Register at Google's headquarters. "It is really hard to maintain a fork of a binary platform.

"Larry Ellison was basically saying that Oracle will keep Red Hat Linux the same but then also make it better. The end result of that will be death by a thousands paper cuts. There will be lots and lots of little incompatibilities.

"So, practically, in two or three years, I expect them either to buy Red Hat and just say, 'Fine. This is our platform.' Or fork it and say, 'Here is Oracle Linux. We built it, and forget that compatibility thing.' Or to use something like Ubuntu where they don't have to rip the trademarks out and they don't have to feel like they have to pay us money."

Shuttleworth has spent the last few days in Mountain View, hanging out a dodgy hotel that shall remain nameless. He's here for the Ubuntu user conference being held at Google's headquarters/Asperger's corral.

Sure enough, myriad Linux geeks bit on the Ubuntu invite, and we found them huddled into different groups – each armed with a well fiddled wiki. We tried to take a photo of one Linux gang only to be yelled at by the creatures. They seemed to think themselves too hideous for the camera, although we disagreed. (You know who you are.)

Sun Microsystems helped add to the Ubuntu good cheer by saying the OS has been certified to run on some of its Opteron-based servers. As of today, customers can Ubuntize their X4100 and X4200 Sun Fire systems and Ultra 20 and 40 workstations. Eventually, Sun plans to offer Ubuntu across its whole x86 family.

Sun seems to have picked Ubuntu as its favored Linux after having given up on Sun Linux. The OS currently runs on the company's UltraSPARC T1 servers.

Sun and Shuttleworth also mentioned something about a glass fish being part of Ubuntu, but that made little sense to us.

Down the stack, you have myriad start-ups delivering "the right product at the right time" for the software market: things like Ruby on Rails and PHP that proprietary software makers are unwilling or unable to match.

The problem surfaces from trying to unite these two worlds.

"It's much harder to get a free software guy enthused about writing an ERP app," Shuttleworth said. 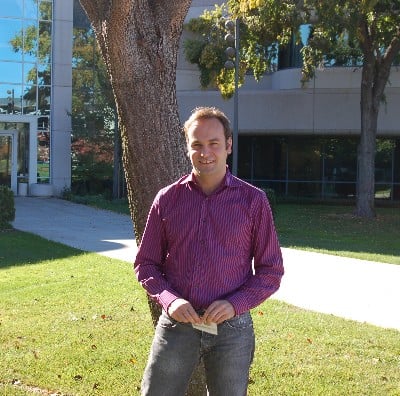 And a lack of enthusiasm is, in fact, something that seems to be haunting the Linux community these days. Red Hat doesn't bother showing up at the Linux World conference anymore, and, if it did, the company would find far more suits than beards.

Er, speaking of Red Hat and a lack of enthusiasm, what did that company do to piss off the whole world?

"Every company has its blowhards and its various good guys," Shuttleworth said. "We have ours.

"But, their margins are very high. They clearly needed to rethink their business model, and Oracle has pricked that bubble. They will have to adjust their margins and their expectations."

"Fundamentally, I think Microsoft is making an intellectual property play. The second thing is 'follow the money.' We see $240m from Microsoft and $40m back from Novell.

"I am sure that Novell just got paid $200m to be on that stage, and Microsoft is going to expect a return on their investment. And not from Novell.

"They are looking to establish, I believe, a framework which gives them a revenue base regardless of the OS.

"We haven't seen the details of the deal. Novell hasn't seen the real plan. The industry is littered with companies that have fought with Microsoft, then went to Microsoft as a cowered partner to do some small deal and then just got axed. Palm, Sybase and, um, Novell." ®