News from the galactic centre

Astronomers using ESA's Integral gamma-ray observatory have spotted a massive eruption of gamma rays in the galactic centre. The researchers say the characteristics of the flare indicate that it could be an extremely rare star-black hole binary system, exhibiting behaviour that might only be seen once or twice in a decade. 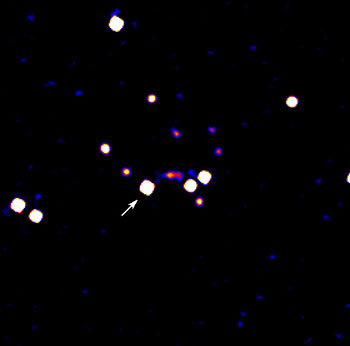 The outburst was noticed during one of the first of these observation sessions of the new Key Programme, which dedicates almost four weeks of Integral's observing time to looking at the galactic centre.

"The galactic centre is one of the most exciting regions for gamma ray astronomy because there are so many potential gamma-ray sources," says Roland Walter, an astronomer at the the Integral Science Data Centre (ISDC) in Switzerland, and lead author of these results.

Gamma ray bursts are notoriously short-lived, so a short response time is vital if scientists are to learn more about them.

In this case, however, the gamma ray source did not fade away almost immediately. Instead, it got brighter and brighter over the next few days. The event gradually faded over the period of weeks. This rise and fall of brightness is known as the light curve, and by comparing the characteristics of the light curve to others on file, astronomers can deduce a lot about the event they are observing.

"It was only after a week that we could see the shape of the light curve and realised what a rare event we had observed," says Walter.

The team had spotted a star-black hole binary, where a star much like our sun is partnered by a black hole. In these systems, the black hole devours its companion star, the immense gravitational attraction literally tearing material from it layer by layer.

The material forms an accretion disc around the black hole. Sometimes, for reasons that still puzzle astronomers, this disc collapses in on the black hole, causing just the kind of outburst witnessed by Integral. ®