Review The organisation that oversees the SD memory card standard announced the SD High Capacity (SDHC) format back in January, but it's taken the best part of eleven months for cards based on the specification to make it to market. There have been a fair few announcements of SDHC products, particularly in Japan, but the first to arrive in the Reg Hardware office is SanDisk's 4GB card...

That capacity is key to what SDHC offers over the vanilla SD specification. SD cards arrange the files and folders they contain using the FAT16 file system. SDHC uses FAT32. Don't worry about the jargon - what it means is that SDHC can support much larger storage capacities than the 2GB the SD format is limited too. As I say, SanDisk's debut SDHC card holds just under 4GB of information - the file system itself takes up some space - and 8GB cards have already been announced by other vendors. 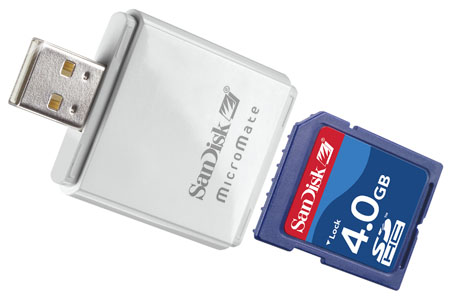 The downside is compatibility. A gadget that supports SHDC will read all your old SD cards, but don't expect your SD-friendly digital camera, memory card reader or that slot in your notebook to be capable of using SDHC cards. For now, devices with SDHC-compatible slots are few and far between - SanDisk's own documentation lists 35 devices, all cameras or camcorders from Japanese vendors - though the numbers are increasing, and are likely to balloon next year.

For now, SDHC support is limited, which is why SanDisk is bundling its SDHC cards with one of its USB-connected MicroMate card readers. It's a true USB 2.0 device, communicating at 480Mbps, and is compact enough to make it easy to carry around with you.

SanDisk's SDHC is rated a Class 2 device, which means its capable of a minimum guaranteed data transfer rate of 2MBps. The SDHC spec also includes Class 4 and Class 6 - respectively delivering at least 4MBps and 6MBps.