There's the same 300,000-pixel VGA camera, with 2x digital zoom, round the back of the 680 as there was on the 650. The picture quality on stills and video is nothing to write home about and really should have been upgraded, given rival devices are already incorporating two megapixel cameras. Speaking of the competition highlights the 680's key omission: Wi-Fi, still missing from a Palm device despite so many Windows smart phones that offer it. 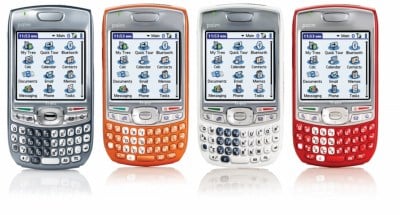 Missing too is a stereo headset - Palm's still bundling a mono one. Since the 680 is designed to be music-friendly - Palm bundles pTunes, a decent MP3 player app - it's silly that it doesn't include at the very least a stereo headset or an an adaptor for the phone's 2.5mm socket to allow the user to plug in a pair of 3.5mm 'phones.

The 680 runs Palm OS 5.4.9, up from 5.4.5 in the 650, but you'd not know it's beyond the appearance of Access logos in place of PalmSource's. That's not to say the handset's software hasn't been changed, but most of the appreciable tweaks have come to Palm's own code than the underlying operating system.

The new incarnation of the Phone app is a big improvement, and it's this that really lifts the 680 above the 650. It adds five tabs along the bottom of the screen to provide quick access to the dial pad; a list of favourite numbers, apps, email addresses and web pages; a Windows' Today-style screen; a simple contacts listing; and the call log. The tabs are selected by pressing the five-way navigation control right or left.

Together with the physical application keys, you can now operate the handset exclusively from the Phone app. If you set your favourites early on, you'll probably never need to visit the Palm OS' standard app menu. All this makes the 680 easier and faster to use than its predecessor and more than a match for Windows Mobile's Today screen - even with the additions Palm itself made to the Microsoft UI in the 750v.

As before, the 680 ships with Palm's fine Blazer web browser and VersaMail email app. DataViz' Documents To Go 8 is included too, to allow Microsoft Office files to be viewed and edited, and PDFs to be read. Palm's own Camera and Pictures & Video apps are present and correct, and as tightly integrated as they were before. In short, the handset comes with a solid array of software tools, and there are plenty more out there to buy and download.