iPhone launched... but not by Apple

Ladies and gentlemen, will you please welcome the iPhone from... er... Linksys. Yes, the iPhone has indeed been launched today, as forecast, but it's not the device so many people were expecting. Instead, it's Linksys' new brand name for its range of VoIP handsets.

That line-up includes not only a couple of new models but five handsets that have been on the market for some time. The latest phones include the $200 802.11g WLAN-connectible WIP320 and its CIT400 $180 dual-mode DECT and Skype product. Both are available in the US immediately and will ship in other territories during Q1 2007.

The news will disappoint folk hoping for an Apple announcement, but that was always unlikely given CEO Steve Jobs' annual launchathon at Macworld Expo is just around the corner. Plenty of analysts - let alone rumour watchers' sources - reckon an Apple phone is on the cards. And while iPhone was a handy way to name the as yet unannounced product, we're sure Apple can come up with a better name than one already trademarked by a handful of companies throughout the years. 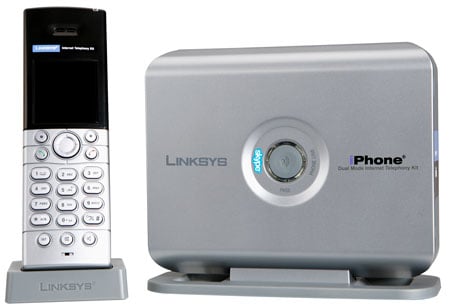 Still, it's a coup for Linksys and parent Cisco, who can now capitalise on the zillions of iPhone items Google lists for a product that, until now, was not even announced. ®