Hands on: We play with the slippery Lumia 1520, Nokia's first phondleslab

The last ever 'proper' Nok?

Nokia World Sometimes you have to leave prejudices aside. To me, phondleslabs (or phablets) – phones with large screens – are inconvenient and slightly ludicrous. If you saw somebody talking into a plate, you’d think they had gone mad.

But that’s by-the-by. An amazing number and variety of people find phondleslabs useful. Such as people who carry luggage with them at all times, like a handbag or a manbag: these are people who don’t put phones in their pocket, so size isn’t really an issue.

Then there’s people who text or message a lot, and read (social feeds or web pages) far more than they call. To them, the phondleslab is a godsend, while small phones are an inconvenience, with their cramped keyboards and tiny screens. Once large tablet phones were the preserve of spods – think back to the O2 XDA - but today it’s women who are driving the market. Around 150 million will ship this year, up fivefold from last year.

Now Nokia wants some of the action, and it has launched two phone ‘slabs with 6-inch displays. One is a bargain basement model, which is the current budget hardware platform stuffed into a larger case. There’s nothing to quicken the pulse here if you’re a power user: a 720p resolution display, a two-year-old chip, a 5MP camera. It’s simply Windows Phone in a large screen device at a budget (c.£200) price.

The 1520 had rather more going for it, and I had a hands on here in the Gulf this week. 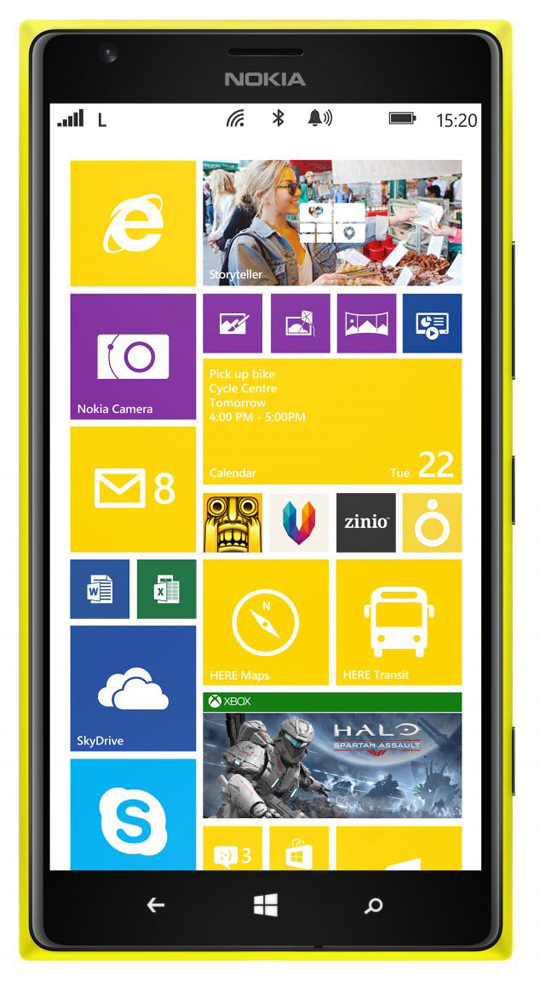 The phondlesome phablet will cost around $749 in the US, according to Nokia, and somewhere between £500 and £600 in the UK (We'll let you know when we do).

The 1520 doesn’t have any visual design surprises, and looks exactly how you’d expect it to look. None of Nokia’s Lumias are what you’d call "grippy", and some are outright slippy, such as the 920. I suspect with its gloss finish, the red 1520 is one of the latter. It’s so glossy I gave up trying to take a decent picture of it. At 209g it’s the heaviest Nokia in years, but as with most phondleslabs it’s thin and doesn’t feel imposing, as the weight is distributed over a large area. 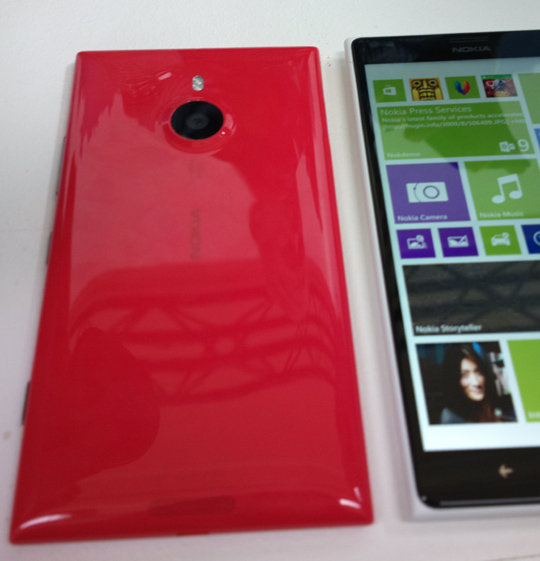 It wears its jacket pretty well. A litmus test of any sleeve for me is how it affects typing – the answer here: not very intrusive at all. 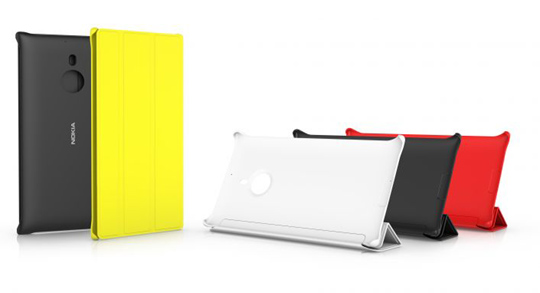 A family of Lumia 1520s, dressed in their Nokia covers, pauses for a marketing render

It’s the first Windows Phone to run on a new generation of hardware, a quadcore Snapdragon 800, and it makes pretty good use of it. (Full phone specs here).

The 1520 packs in Nokia’s oversampling imaging sensor, becoming the third real "PureView" imaging phone from Nokia. It’s a cut down sensor from the 1st generation 808 PureView and 2nd generation 1020, both of which had a 41MP square. Here it’s 20MP, and the phone produces a 5MP shareable image and a 15MP "master", which can be retrieved via a PC.

Because of the new hardware, and the smaller sensor, I found shot-to-shot times were around a couple of seconds, which is quite acceptable. A delay of four seconds is fairly common on the 1020, frustratingly long when the target is fast-moving, such as a sports car or a child.

This left me wondering about the logic of Nokia’s timing launching the 1020 this summer. Why not wait three months and launch the 1020 on the new generation of hardware? Regardless, anyone picking up an 1520 gets a terrific camera, with rich audio recording, and without the main drawback of the 1020.

The phone boasts a 3400mAh battery, which goes a long way, particularly on Windows Phone, with a claimed 13.4 hours of Wi-Fi browsing, and 25.1 hours of 3G talk time. The talk time metric is fairly useless for gauging real world performance these days, because the display is off or dimmed and the CPU largely idle. Needless to say performance appears to be excellent. But then again, it’s excellent on the budget 520 which costs less than £100. You really don’t need a quad core processor to run Windows Phone well: the difference is only really noticeable rendering a web page. A web page like this: 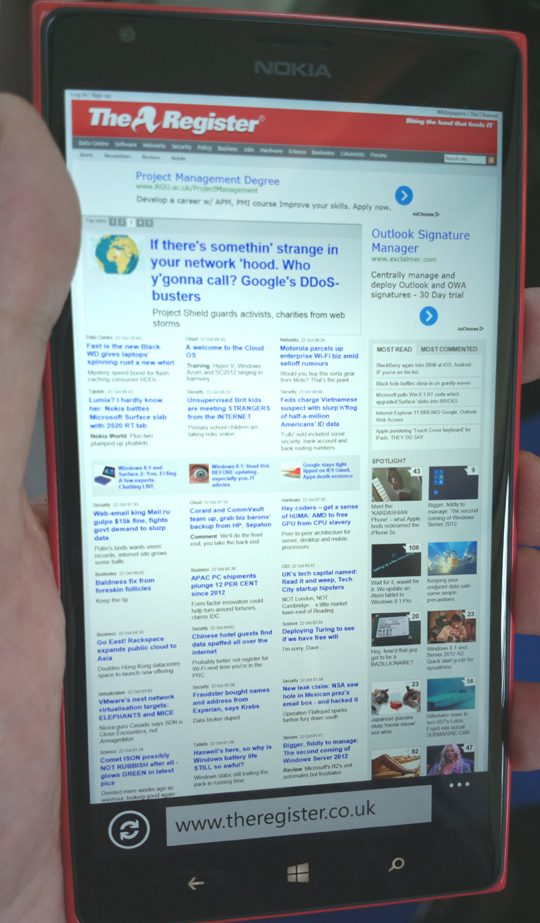 El Reg as seen on a Lumia 1520, Surprisingly legible, despite the photo evidence...

And here we get to one of the two main points of a Phondleslab. Look how much detail you can see on the screen, and all those headlines and subheads are pretty legible.

And the other point? Typing is ludicrously easy on the massive keyboard. 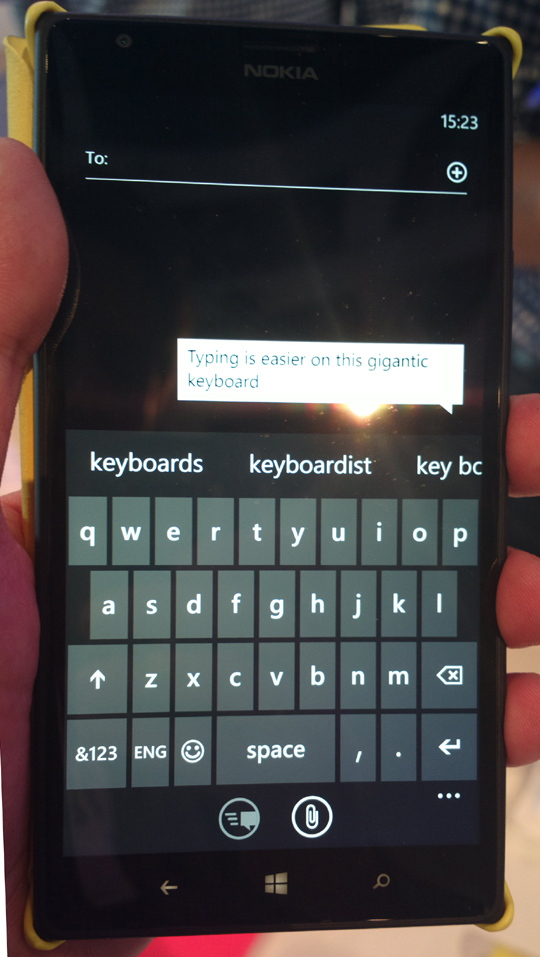 You can adjust the font size, but alas not the size of the input box, although of course it will scale according to how much text you have typed.

This brings me to the one downside of the 1520 – and there’s nothing Nokia could do about it. GDR3 is very much a placeholder for the next major version of Windows Phone. And it feels like a placeholder.

A proper update for 1080p screen apps would redesign the key applications like Calendar views and allow more text to be displayed on the Live Tiles to take advantage of the large screen and higher pixel count.

The whole point of Windows Phone’s Live Tiles, according to Microsoft, is for notifications, so you can glance quickly and see updates without entering an application. But the default Live Tiles have only ever shown one email (the most recent) and one calendar appointment (the next one).

With GDR3 those limitations remain. Entries displayed in the month view in Calendar are still illegible. You can’t make a Live Tile expand to the width of the screen, and it still only shows information from one email, the most recent. 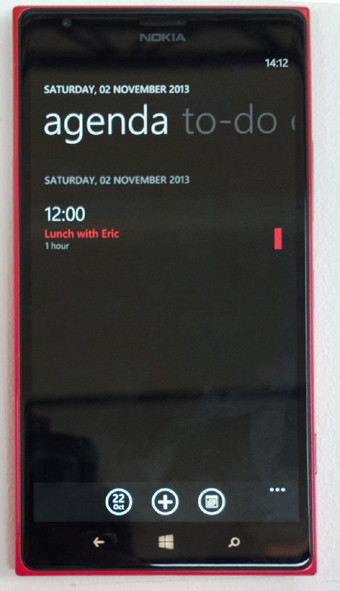 And the browser still limits you to six tabs, and the most rudimentary interface. Which is slightly silly on such a powerful device.

By next summer a major Windows Phone overhaul should be available to fix these niggles – yes, just in time for the next generation of late 2014 phondleslabs. Microsoft has remained mute on whether today’s models will be upgradeable. I’d be surprised if this one wasn’t.

The 1520 is amongst what could be the last-ever branded Nokia phones, and it’s hard to criticise it. It embodies how much Nokia has renewed its focus in the past couple of years on making decent products. ®