The Church of the Algorithm, Google, is employing a robot to select the faithful.

According to the New York Times today, an algorithm scans job applications and ranks candidates on a score from 0 to 100. From next month, it will be used to screen all applications.

The Times quotes Google's "Vice President of People Operations" (as opposed to Machine Operations) , who explains -

"With traditional hiring methods, we were worried we will overlook some of the best candidates."

That's one way of putting it. Because the demand for jobs at Google outstrips the supply of vacancies, it's more accurate to say that the robot is simply accelerating the rejection process. 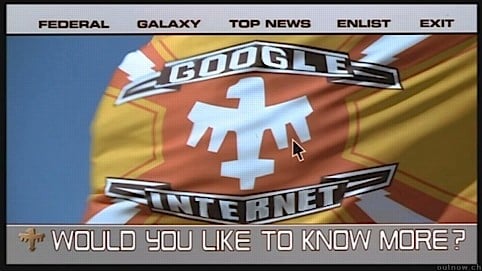 Google is famous for its faith in reductionist, functional solutions. It even likes to suggest that such algorithms emerge spontaneously, full of natural goodness - and without apparent intervention by imperfect humans. Answering accusations of bias in Google News, the manager responsible for the service is on the record as explaining -

"The truth is, Google News doesn't have a point of view...It's a computer, and computers do not understand these topics the way humans do and can't be systematically biased in any direction." [see Google News' chief robot speaks out ]

(And they don't taste of bacon, either.)

And the Times confirms that the job-bot's selection criteria is based on surveys from existing staff. One of the indicators is ominously called "organizational citizenship". No square pegs in those round holes, then.

In Douglas Coupland's Microserfs, the company's monoculture is enforced by obedience to the cult of personality - top down. By contrast, Google appears to be developing its monoculture from the bottom-up. But it's still a monoculture - and one only likely to be reinforced by algorithmic rejection of "unsuitable" candidates.

As we discussed here recently, an algorithmically-minded corporation is ill-equipped likely to miss problems that can't be solved algorithmically. No robot can wish them away.

If you have an amusing experience of Google's recruitment practices - successful or otherwise - share it with us here. We'll set our own robot on the replies, and pick out the ones whose opinions most closely resemble our own.

Google Answer to Filling Jobs Is an Algorithm - NY Times