NSFW It's official: paradigms were shifted, technologies redefined and, if the Macheads are to be believed, the world momentarily stopped turning on its axis this week at the unveiling of the long-awaited Apple iPhone™®©.

And very pretty it is too, although some commentators are suggesting that the price - coupled to the Cingular tie-in deal - may be a punt too far for the average consumer.

We shall see. If the iPhone does go the way of the Sinclair C5, forward-thinking users will already be contemplating how it might best serve humanity in the afterlife. We've also put some thought into the matter, and can today offer our top ten tips as to how to extract the maximum possible value from your dead iPhone.

Please note we haven't included the obvious, viz: use it to prop up a wobbly table; deploy it as a drinks coaster; or buy 100,000 unwanted iPhones on eBay and construct a gigantic pyramidal monument to the genius of Steve Jobs. Rather, we've picked the best and most ingenious solutions as suggested by Vulture Central staffers. Enjoy:

1: Stick it in the blender 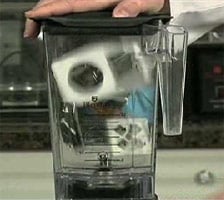 A pretty perverse concept, you might think, but in reality it could provide seconds of fun for all the family. The inspiration for the blended iPhone comes from Will It Blend?, who have in the past tested an iPod to whirring destruction.

Alternatively, why not pop your iPhone in the microwave? Or, you could simply smash it with a sledgehammer, and post the results on YouTube. Marvellous. 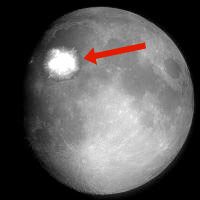 This option is specifically for the British iPhone owner demographic who want to contribute something to the UK's space programme.

Professor Sir Colin "where's my probe?" Pillinger will doubtless to be happy to advise how best to embed the iPhone deep into the lunar surface. The resulting impact can be captured in an image such as that seen here, and subsequently posted on the internet for the science community's viewing pleasure.

The possible benefits of such an experiment are legion, including a better understanding of how a future British Moon base might be fortified against Chinese space-launched iPhone attack.

3: Donate it to NASA 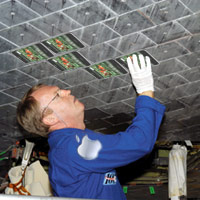 An alternative space proposal is to send your dead iPhone to the space shuttle programme. Indeed, given Apple products' legendarily robust and scratch-proof construction, the iPhone will be warmly received by NASA as the ideal replacement for those pesky heat-resistant tiles.

As you can see here, the administration has already begun fitting iPhones to Discovery in anticipation of the next jaunt to the International Space Station. Once it arrives, The Register has learned, astronauts will detatch one iPhone which contains an emergency playlist of morale-boosting MP3s including David Bowie's Space Oddity and the soundtrack to Alien.

4: Use it to create your own fashion range 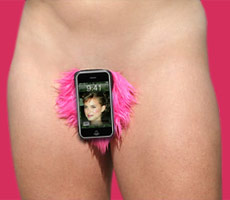 Let's face it, the possibilities here are endless: iPhone earrings, solar-powered iPhone bikinis or designer iPhone body armour (for our plucky lads in Afghanistan) - the only limit is that of your imagination.

So imagine this: the iPhone merkin, as seen here in Natalie Portman "come hither" mode. Guaranteed to break the ice at parties and add an extra va-va-voom to your intimate relationships. The iMerk will be available shortly in a range of colours including Jobs Jade, Minty Apple Green and Cisco Cerise, as shown here.

5: Turn it into a skysurfing board for your guinea pig 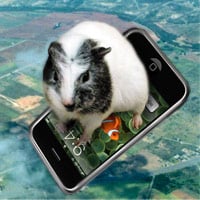 Give your furry friend a once-in-a-lifetime trip aboard the iPhone skysurfing board - a 10,000ft rollercoaster ride of airborne joy.

And, if the little fella doesn't survive the drop, you can always get in touch with the Peruvian Guinea Pig Marketing Board, which offers a range of tasty guinea pig recipes including our particular favourite: Montezuma's sacrificial guinea pig gumbo. Tasty.

Next page: 6: Use it as a personal attack weapon
Page: