An entire image's worth of data has been encoded into a single photon, without information being lost, for the first time. 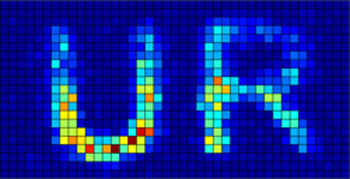 The image "UR", for New York's University of Rochester, where the work was carried out, was also decoded (pictured above) after being stored briefly.

The team behind the development, pubished in Physical Review Letters, say it opens the door to optical buffering and eventual long-term light-based information storage. Optical buffering is also a way to beat a communications bottleneck: converting an optical signal to an electronic one.

Assistant professor of physics, and leader of the team that created the device, John Howell said: "It sort of sounds impossible, but instead of storing just ones and zeros, we're storing an entire image. It's analogous to the difference between snapping a picture with a single pixel and doing it with a camera - this is like a six megapixel camera."

The image was created simply by shining a single photon through a minute stencil. At that scale, quantum mechanics dictates that a single photon passes through all the holes in the stencil simultaneously, picking up the shadow - or the information - from each one.

The photon then passed into a four inch "cell" of caesium gas at 100°C, where it was slowed. The new approach to slowing light used by the researchers means that thousands of information-bearing photons could be stored in a single cell without data being lost.

Alan Willner, professor of electrical engineering at the University of Southern California and president of the IEEE Lasers and Optical Society said: "The parallel amount of information John has sent all at once in an image is enormous in comparison to what anyone else has done before. To do that and be able to maintain the integrity of the signal - it's a wonderful achievement."

The next stage for the team is to attempt to store a photon permanently - the breakthrough which could lead to true light storage of vast quantities of information. ®

Professor Howell had to do a little back-pedalling on the claims made in the Univerity's press information. See here at Scientific American.