User beware: Sun and Intel want to talk to you about Solaris

Comment Never was there a grander marriage forged in rhetoric than when Intel met Sun Microsystems.

The lovebirds jettisoned years of marketing hyperbole by agreeing to hawk each others' products. Sun will actually sell something - Xeon-based servers - while Intel will play with and celebrate Sun's Solaris operating system. Congratulations go to the couple for switching gears at such astonishing speed. Just last month, they were still spitting in each other's faces.

Our sources indicate that Intel and Sun spent weeks hashing out their arrangement, making their ability to keep the deal a secret quite amazing. [In mitigation to the press, it would have been hard to sense the Sintel infatuation - what with Intel's server chief Pat Gelsinger making fun of Sun's server business before Christmas,- and Sun Chairman Scott McNealy calling Intel-based servers "space heaters," while Sun co-founder Andy Becthtolsheim laughed.]

If there is a God, Sun will still spit in Intel's face when discussing Itanium, and Intel will still bitch-slap Sun over its higher-end UltraSPARC chips. These squabbles have, among other things, made for some of the funnier moments in Intel Developer Forum history.

Were Sun to give up on bashing Intel, McNealy would lose a huge chunk of his stand-up routine. He's now got $2bn from Microsoft, and a Xeon server line. Microsoft and Intel always provided better targets than IBM's services unit, or the pretty hapless Red Hat.

But without question, Intel and Sun will tone down their attacks against each other. And that's bad news for customers because their combined rhetoric machines are now aimed at you. Welcome to Rhetoric 2.0.

All week Sun's CEO Jonathan Schwartz has insisted that Solaris and not Xeon was the key to the Sintel union. During an earnings call, he chastised reporters for mucking up "round one of the media coverage" on the event.

By some miracle, Sun convinced Intel to let it mention Solaris ahead of Xeon in the companies' news release and then Intel CEO Paul Otellini led with Solaris as well, during the press conference to announce the deal.

Intel hasn't been so obedient since Steve Jobs blessed the company with Apple's business.

[And have a look at this slide. See if you can pick up on the constant.] 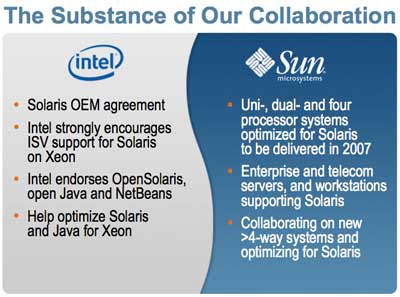 Schwartz believes that Intel's decision to make sure Solaris x86 runs well on its white boxes and to provide some engineering support for the OS will open the fabled gateway to more business from Dell, HP and IBM. Dell can no longer tell its customers that Solaris x86 is a real pain because its good buddy Intel has the OS flying on very similar Xeon-based boxes.

Sun has thumped away at the Dell, HP and IBM as cheery Solaris x86 OEMs notion for years. The reality never seems to match Sun's enthusiasm. Maybe Schwartz is right and the combined enthusiasm of Sun and Intel will win over Sun's rivals. Without question, Sun needed a shift in tactics, so kudos for making that change.

Even if Dell, HP and IBM continue mostly to ignore Solaris x86, you're sure as heck going to hear about the operating system a lot. Every time Otellni would have made fun of Sun as an "irrelevant" vendor, he'll now celebrate the wonders of Solaris x86. Hell, even Schwartz is celebrating Solaris for Otellini. The growing number of Solaris downloads "I think allowed Paul to embrace Solaris to the extent he did," Schwartz said during the financial call.

Well, that and the constant reminders from the marketing team to embrace Solaris.

No matter what Sun and Intel tell you, this is a chip deal and a chip deal only for the moment. They've got a lot to prove on the OS side, and that's why the rhetoric crew and not the media missed round one of the announcement.

It will take great resolve from the media and customers to fend off the combined marketing savvy of Sun and Intel. The companies have spent years bashing each other, and now that animosity has been turned to Solaris love for you. ®

Customers could be better off with specialist providers and service partners, Chocolate Factory decides
Applications19 Aug 2022 | 9

If you absolutely must keep using those proprietary formats, walk this way
Applications19 Aug 2022 | 29