Would any black resident please stand up?

I think I'm every bit as beautiful as I was, although it seems that not everyone would agree. I've been in this skin for over two weeks now, and my experiences have definitely been mixed. My in-game friends have remained friends: I haven't watched people who I know well suddenly backing away from me. But strangers do keep their distance now more than they did. People tend not to strike up conversations with me, although there are some exceptions. Still, there's no question that I attract fewer new people than Destiny 1.0 used to do. I've also noticed that I get hit on a lot less, by men and women, and I wonder why. What kind of freak would not want to hit on such a gorgeous girl? Are people repelled by my apparent blackness? Do they imagine some presumed "culture barrier" is going to make it hard for us to communicate? Are they concerned that I can't follow their chatter about the artsy-fartsy bourgeois nonsense that so often concerns them? Are they frightened that I'll up and pop a cap in their punk ass? 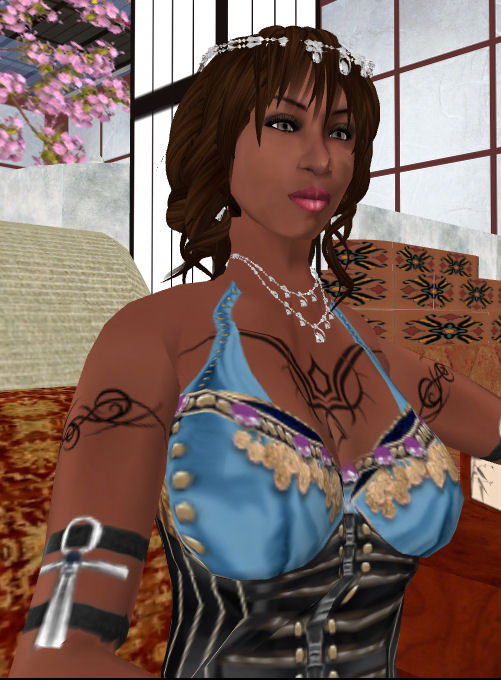 Second Life requires a broadband connection and a fairly potent computer to run properly. If you haven't got at least 1G of system RAM, a 128M graphics card, and a 3M broadband connection, good luck. So you can see right there that SL automatically selects residents from the middle-classes, who can afford at least moderately-priced toys.

But there's more than money at play here: SL selects people who believe that an up-to-date computer system is something worth having. There are plenty of users who get by happily on clunky old machines that run their favourite applications well enough.

But to really care about your computer's supposed features, you have to be, first, free to worry about that instead of, say, food and the electric bill, and second, a bit toy-proud in a nerdy way. The lower orders express their toy-pride with power boats, trucks, exotic televisions, and above-ground swimming pools. The middle classes take more pride in toys that suggest a university education, an open mind, a thirst for learning, and comfortable familiarity with information and the language of technology. It's in the heart of white, middle-class suburbia that you'll find the majority of hotrod computers, educational software, cool games, and fast connections.

I've found this to be quite naive. SL reflects a slice of life: a very white, Protestant, progressive, bourgeois slice. I can't recall if it was in Paul Fussell's Class, or Lisa Birnbach's The Official Preppy Handbook that I encountered the fine observation that it is the upper middle classes who typically play at life. Euphemism is always low and vulgar ("let's hide the salami"), but it becomes interestingly classy when it invokes a game ("let's play hide the salami").

Next page: A kinder, gentler kind of racism
Page:
Corrections Send us news