House of Cards The dust has finally settled after a week of debauchery in London.

The casino affiliate marketers (casino affiliates refer business to the online casinos) from the CapEuro gig throw the best parties, although the conference itself isn’t mind-blowing, while the International Casino Exhibition is.

The ICE is truly something to behold. Industrial money counters, lighted buttons for slot machines, and everything in between; from snooker and air hockey tables and arcade games to the latest in touch screen technology; it spreads across a head-spinning 59,000 sqm of exhibition space. What does that total - about 15 American football fields worth of casino equipment and software hustlers? 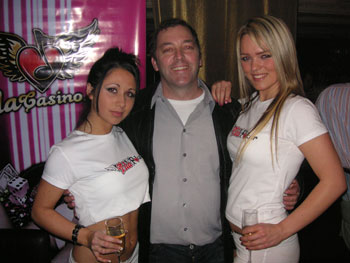 Of course, once a day of playing the latest Sega flight simulator game or shooting carnival hoops has ended, decompression is in order. Don’t worry- the vendors in the gambling world are masters of hospitality, and that’s when the open bar at whatever swank London club has been chosen for the night kicks in.

Relax with a cocktail, chat with industry legends like Adrian Brink, creator of the first e-wallet, or Marty Reiner, one of the MIT guys banned from Vegas a few years back, who now runs Dublinbet.com, offering remote gaming from a live casino in Dublin. Not bad.

Now on to the gambling news.

In a move savored by the flesh-eaters here at Vulture Central, traders at Intrade.com posted futures contracts last week on which major players in the online gambling world will be the next to flee the US market. Check for Poker Houses under the Entertainment section.

As the feds hammer away at more traditional - ie., centralized - e-wallet payment processors such as Neteller, the appeal of a distributed payment network grows clear. Why make it easy for them by leaving all your eggs in one basket, as it were? But it remains unclear just how far the Department of Justice intends to push its extraterritorial claims on jurisdiction over companies that no longer do business with the United States, and in some cases never did.

Although the current DOJ obsession with the online gambling world borders on the pathological- a recent press release described it as "a massive criminal enterprise," conjuring up images of the roundtable of villains in the Bond classic Goldfinger - even the looniest of prosecutors would have to be wary of wasting valuable resources pursuing fragmentary peer to peer transactions around the globe, particularly into jurisdictions considerably less pliant about handing over their citizens than the United Kingdom.

Antigua, the tiny Caribbean island, is showing more gumption, for one: according to a report on MSNBC.com - confirmed by Register sources on the Antigua side - the American government has lost the latest round in its attempt to beat back access to the American gaming market by Antiguan providers. As expected, they have been found to be in violation of their agreements under the WTO, although both parties are covered by a confidentiality order.

Next page: Wait and see
Page: