The cure for wobbly Wi-Fi?

The two machines were set up to operate on a closed IP network with manually entered IP addresses. Plugging in the first PL-200AV sets it searching for other devices and it quickly spotted the second PL-200AV when I plugged it in. Just like the Devolo AVdesk pairing, the two PL-200AVs negotiated their connection very quickly, handy not just when you're connecting them for the first time but also in coping with sudden signal loss arising from the inevitable noise on the mains wiring. 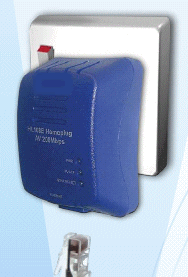 Just as I had with previous powerline Ethernet tests, I ran the open source network testing tool iperf to measure the link's TCP and UDP bandwidth. I got 50Mbps and 59.4Mbps, respectively - using Windows XP's Task Manager utility to track network activity, I got 52 per cent utilisation of the laptop's 100Mbps Ethernet port for TCP and 61 per cent for UDP, translating to effectively 52Mbps and 61Mbps.

Those numbers compare to the 56Mbps and 59.4Mbps - respectively, TCP and UDP bandwidth - iperf recorded for the HDX101 pairing, and the 50.6Mbps and 59.4Mbps it measured using the Devolo units in the same set-up.

It's perhaps worth pointing out here that while the iperf test was running, the PL-200AV pairing generated a much smoother trace in Task Manager than the HDX101s had, suggesting it experienced far fewer sudden dips in signal than the HDX101s did, or that the two Solwise boxes were able to recover from them much more quickly.

Next, I set up the open source media playback and streaming application VLC to stream a 1080i HD video encoded in MPEG 2 from the PC to the Mac. Playback on the MacBook Pro was as smooth as anything. There was clearly sufficient bandwidth to send the same video simultaneously from the Mac to the PC, although playback on the PC was very juddery because its GPU and CPU together lack the power to decode the image data smoothly but not, I'd say, for reasons of limited bandwidth.

While streaming the video to the Mac, I also measured the remaining available TCP bandwidth using iperf. Devolo's old 85Mbps adaptors, which I reviewed early last year, can smoothly transmit the HD stream, running iperf alongside it caused some picture break-up and yielded an available bandwidth figure of just 3.7Mbps. The HDX101s played the HD video but yielded spare TCP bandwidth of 37.9-54.7Mbps, depending on whether their quality-of-service algorithms were set to favour UDP or TCP - favouring the latter resulted in higher bandwidth but some picture break-up.