Remembering Anna Nicole Smith and her impact on the American Dream

And ninthly I once thought about spawning with Anna Nicole Smith. Offers were made. But, in the end, a $400m baby seemed like too much of a burden for such a simple man with such simple tastes. Decency - that's what I'm all about. That's what I preach - Tales of Lord Astor and other Great Valentine's Day Gifts, Julio Stantore

It was easy to look at Anna Nicole Smith's breasts and wonder what went wrong with America.

Her breasts, built on a silicon foundation, failed to represent anything good about this country. They shocked. They bragged. They overwhelmed. They popped up on a mediocre reality TV show. Who let that happen? Who willed those breasts into such a prominent position? Didn’t those mounds point to the type of shallow character haunting our country?

Anna Nicole Smith's chest defined the American Dream. It came from humble, small-town Texas roots. Through focus, optimism and well-placed investment, those breasts exceeded expectations. And, eventually, they attracted a billionaire - an oil tycoon, no less. These were overachieving breasts that went beyond their average beginnings. They helped create a franchise. They led to a mini-empire of Anna and symbolized much of the American tradition.

It may seem flippant to link thoughts of American Empire with inflated boobs. There is, however, something astonishing about anyone who can rise from being a Red Lobster waitress and Wal-Mart clerk to becoming a Guess model, wealthy widow and celebrity. It may not be what Horatio Alger envisioned, but he didn't know about implants.

The privileged, the hard workers, the average and the lazy all share this belief that America is currently the greatest country on the planet. Other nations have their admirable qualities, success stories and charming cultural elements, but they don't possess the raw power present here or our sense of assurance - an assurance that this Empire has never been stronger.

Only true pessimists would suggest that the traditional qualities associated with the American character have disappeared. Patriot Act or not, the populace enjoys incredible freedom. Hard work can help you "get ahead," and excessive rewards await that effort. Americans are still confident, casual, friendly and open. This beautiful land does create beautiful, creative people - the kind of people that don't mind trampling on tradition if it means unearthing something better.

It's only with a collapsed Soviet Union in the rear-view mirror and a slightly over-aggressive Homeland Security department that the American Empire and Anna's breasts appear obscene. 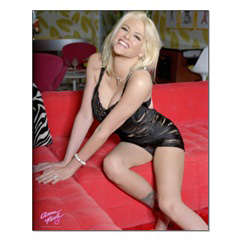 With nothing to compete against, Americans take on a decadent character. Where we once scraped and fought to justify our way of life, we now simply enjoy the spoils. Strong tenets of capitalism devolve into dotcom fantasies where money pours into undeserving pockets. Hard work and ambition are replaced by flight of fancy and corrupt capital and still there are shrubbery-filled suburbs, solid dishwashers and better breasts. The greatness continues but with a stench of shallowness hanging around it.

But the pansies who focus on such shallow decadence are, well, pansies.

We've done what we were supposed to and created an Empire of bounty and opportunity - an Empire that can't say "no" and that faces no serious foes.

Like Anna Nicole Smith's chest, we have reached our potential and then exceeded it. We have the biggest mounds, and they're wonderful to look at. Innovation, desire, capitalism and middle-class grandeur built these beautiful jugs.

Sure, they're gaudy and oppressive, but you certainly would not have described Anna Nicole Smith's bosom as an underdog. No, those breasts were unequalled, and they made us proud.

A pessimist would say Anna Nicole Smith's chest had nowhere to go but down. Enjoy them while you've got them because there's always a better, younger pair preparing to compete. But had Anna pushed on for just a few more years, you can be certain that a new scientific breakthrough would have occurred - something capable of keeping her ta-tas magnificent for years to come.

China can fluff around with its weak-chested lasses. We’ll go ahead and celebrate Anna and her audacious breasts. The Empire lives! ®

Otto Z. Stern is a director at The Institute of Technological Values - a think tank dedicated to a more moral digital age. He has closely monitored the IT industry's intersection with America's role as a world leader for thirty years. You can find Stern locked and loaded, corralling wounded iLemmings, talking, drinking and driving, reflecting on Anna Nicole Smith's American chest, suppressing Bill Gates U, developing strong Mexican engineers, corrupting his youth in Sadville, masticating beta culture, booing our soccer team, following Jimmy Wales, nursing an opal-plated prostate, spanking open source fly boys, Googling Bro-Magnon Man, wearing a smashing suit, watching Dead Man, dropping a SkyCar on the Googleplex, spitting on Frenchmen, and vomiting in fear with a life-sized cutout of Hilary Rosen at his solar-powered compound somewhere in the Great American Southwest.