For your reporter, the E90 was all but eclipsed by a device that came completely out of the blue: Motorola's UIQ slider phone, the Motorizr Z8.

This, Moto's first new Symbian phone for four years, isn't a touchscreen device, as every UIQ phone hs been to date. But it is the most impressive competition Nokia has faced at the high-end of the market for a very long time. And this is all the more surprising given the well-publicized difficulties Sony Ericsson has had getting its UIQ 3 devices to work. The Motorizr Z8 takes a clever new design - Moto calls it a "kick slider" but I think "bendy phone" or "banana" is more descriptive and more likely to stick - to a thoughtful software user interface to create a very satisfying experience.

Moto has remedied almost all of the deficiencies of the UIQ3 specification, settling all doubts that it can work for one- handed use. This is remarkable given that Sony Ericsson has been so closely involved involved in creating UIQ. The Z8, in short, does everything it says on the tin.

So why did the E90 leave us disappointed?

It's not because it's underpowered, that's for sure. If it had been Nokia's intention to cram in every piece of state of the art mobile technology into one handset, then it certainly succeeded. 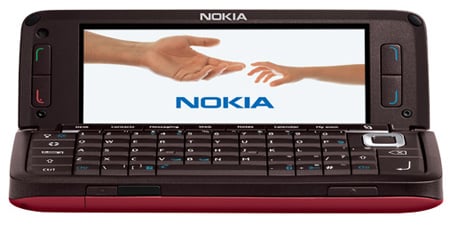 Like Apple's iPhone, the E90 a technical triumph. But like the iPhone too, it's all dressed up with nowhere to go. After some time with the E90, it's hard to avoid two design decisions that cast the rest of the project in an unfairly harsh light.

The first of these is apparent when, having been primed with press photos or snaps from the gadget sites, you open it up for real work for the first time. In the photos, the E90 looks like it's a laptop replacement. Echoing around the web yesterday were many comments proclaiming the phone as the first communicator worthy of the Psion legacy. With the Psion Series 5 and even the Psion Revo, it was possible to touch type two-handed. Alas, unless you have very small fingers indeed, you're going to be disappointed. So you're really obliged to use your thumbs.

The reality is even worse, however. I found I made more mistakes typing on the E90 than I do on an E70 or an E61, which really are optimized for minimizing thumb input errors, particularly the E61, with its widely spaced keys. I made even more mistakes on the new communicator than on its true predecessor, the Nokia 9500. And nothing about the experience suggests I'm going to adapt to the device.

Why, I was left wondering, did Nokia go to the trouble of creating such a large device to house a full QWERTY keyboard when the final user experience - and in the end, as Apple knows, this is what really counts - is so poor. Was it simply to demonstrate its technical prowess? To beat the world record for the longest feature list in a smartphone?

Nokia may plead circumstances beyond its control for this curious state of affairs. Veteran Psion users will recall how the company used clever patented hinge designs to maximize the amount of space available for the keyboard. This trick bought precious square millimetres of space for the keyboard. (Psion's design company also invented a new kind of key design, giving the keys additional 'travel'). Even though Psion doesn't use the IP in its products any more, it won't license the patents, we're told, so no company can recreate the Psion experience. If that's really true, then Nokia should buy the rights outright, rather than continue to develop products that can't deliver a user experience it promises.

In almost every other respect, the E90 really is a pocket-sized laptop replacement, that to get so close to the goal and fail is seriously disappointing.

(Case in point: because of a dead laptop power supply, I'm bashing out this article on a Nokia SU-8W keyboard, connected by Bluetooth to an E70. It's suitable really only for emergencies, and of course I could be using the Nokia keyboard with the new Communicator. But then that would negate the whole idea of building a full QWERTY keyboard into the Communicator. I may as well use Nokia's Linux tablet - available for half the price.)

Next page: It's the software, stupid
Page: