Few start-ups would have the guts or audacity to unveil their first product at the Computer History Museum. D-Wave Systems, however, did just that today by unveiling the world's most advanced quantum computer - a product that may one day be displayed at the museum as a breakthrough system or simply as a curious relic.

Although based in Burnaby, British Columbia, D-Wave went straight to heart of Silicon Valley to show off the "Orion" system in public for the first time. The hardware has the potential to disrupt the computing market by crunching through the most complex of problems in record time. With any luck, operations such as protein folding or drug discovery that can take days, weeks and months on large cluster systems will be reduced to just a few minutes. The D-Wave system will do this by relying on a foundation of quantum mechanics rather than the digital base of "classical" computers.

While celebratory of their technology, D-Wave executives on hand at the Computer History Museum event softened the hype factor by stressing two main points: the Orion system, as it stands today, is a slow, somewhat awkward proof of concept only and quantum computers will not replace digital computers but rather serve as complements that handle a specific set of problems.

"(What this marks) is the end of beginning of quantum computers." 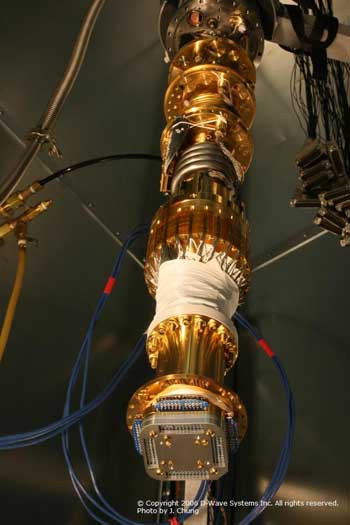 A number of research bodies have spent years hammering away at the quantum computing notion. At the very heart of the technology are "qubits" or the quantum equivalent of the 1s and 0s used by digital computers. Like "classical" computer bits, a qubit must be either a 1 or a 0, although it can go one step further by taking on the 0 or 1 state at the same time.

Over the last year, D-Wave has progressed from a 2-qubit system up to today's 16-qubit system.

"When you have information of any sort, you always have to write it on something," D-Wave's CTO Geordie Rose told us in an interview. "So, there is some physical object on which you place that information.

"An essential, core concept here is that the properties of that information - what you can store and what you can compute - depend on the laws of physics. So that if you write a zero and a one on something that is inherently classical like a transistor or magnetic memory, the information behaves in a certain way.

"If you are smart enough to be able to find a way to write information on a quantum mechanical object, the information behaves in a different way. And you can use that to accelerate computation significantly. So, in some cases, the acceleration is exponential on some previously intractable problems - things that you simply cannot do even in principle. With a computer of this sort that you can solve those problems easily."

To make this magic happen, D-Wave systems takes a pair of superconductors - aluminum and niobium - and cools them down close to absolute zero. At such a temperature, the metals take on the properties that allow them to hold the 1 and 0 state simultaneously.

Obviously, D-Wave has not crammed Orion into a 1U rack-mount case that will slot into any data center. Instead, it packs the computer's innards inside of a fortress-like structure meant to block outside noise. Then, it uses a variety of other contraptions including the chip holder attached to a dilution fridge as seen in the picture.

Custom gear aside, D-Wave claims it will have some cost advantages when its product hits the market in 2008. For one, the company's chips can be produced via standard semiconductor manufacturing techniques. (NASA's JPL makes the chips at this time.) In addition, the power consumption of the chips is in the nanowatt region.

"Even millions of qubits today today would consume less power than off-the-shelf processors," Rose said. He then added that, "The cooling systems used for past computers are far harder to build and more complicated" than those needed for quantum computers.

And now to the serious questions.