3GSM Smart-phone maker HTC announced a trio of new devices this week... or did it? In fact, it launched four products, but for some strange reason only mentioned three of them in its document. Would you welcome, then, the 'missing' HTC 3GSM device, the P3400. 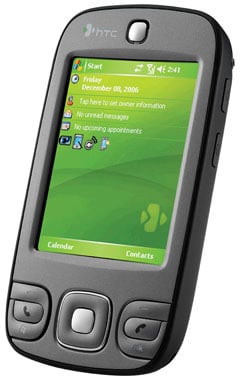 It come in a classic PDA phone form-factor: the P3400 sports a 2.8in 240 x 320 touch-sensitive display and there's no slide-out QWERTY keyboard. The only limitation to its connectivity options is a lack of 3G - it has quad-band GSM/GPRS/EDGE, Bluetooth 2.0 with A2DP wireless audio, and Wi-Fi. Actually, some of HTC's P3400 documentation fails to mention WLAN support, so it's possible the device lacks this feature too.

The device incorporates a two-megapixel camera and an SDIO slot for memory expansion - there's the usual 64MB of RAM built-in. Interestingly, the P3400 is a Windows Mobile 5 device - or at least that's how HTC is listing it at the moment. It's powered by a 201MHz Texas Instruments OMAP 850 processor, and measures 10.9 x 5.8 x 1.8cm. It weighs 126g.

HTC describes the P3400 as "the affordable business PDA", but provided no guide as to the handset's pricing. Or availability, for that matter.