ALK Technologies will next month ship the latest incarnation of its CoPilot Live navigation software for Windows Mobile-based handhelds and handsets, the company announced this week. The app's key addition: support for social networking-style community services.

By that, we don't mean it'll guide your round to the home of Miss Anthropee, the buxom lass you've been getting to know via her MySpace page. We're sure it'll do that too, but ALK has in mind letting CoPilot Live 7 users share map styles, voices, routes, POI locations and so on, all via the CoPilot Central site. 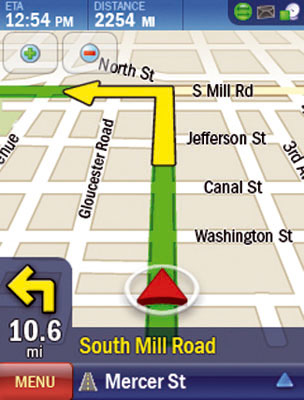 The package contains all the features you'd expect from an update satnav offering: the latest maps - from Navteq - updated London Congestion Charge information and nationwide speed-camera details, seven-digit postcode searching and more than a million POIs. Like past versions of CoPilot Live, the new incarnation provides location tracking and live traffic data. The new release lets to send your current location as a map via MMS.

CoPilot Live 7 goes on sale at the end of March bundled with a GPS receiver and car-mount kit for £180. Carriers T-Mobile and O2, who already offer phones bundled with CoPilot, are expected to offer the new software for free with a number of handsets.