Warning: Graphic content Islamic militants may not approve of the West's way of life, but they seem to have no qualms about using the information technology it perfected to spread propaganda.

The latest reminder of this sad observation comes in the form of a video being circulated on Google Video that appears to provide graphic footage of US-led service men being shot by a Baghdad sniper who goes by the name Juba. 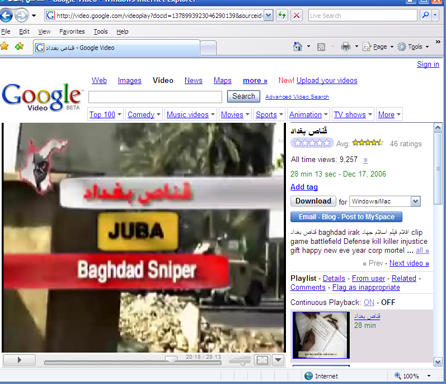 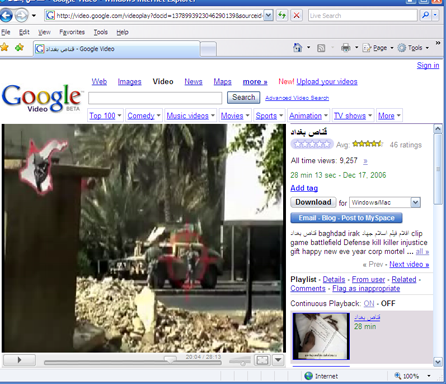 The 28-minute clip of grainy images documents attacks on at least 28 troops. With music playing in the background, the video slowly stalks them as they get in and out of their Humvees, sit at check points and carry out other mundane activities in what appears to be in the city of Baghdad. One by one, they are silhouetted by red cross hairs and seconds later they are shot, often to the great anguish of their compatriots.

"The idea of filming the operations is very important, because the scene that shows the falling soldier when hit has more impact on the enemy than any other weapon," a man the video describes as the "commander at the sniper brigade in Baghdad" says. "Every brother sniper knows that every bullet placed is to kill a single soldier, that is if not two." A translation of the commander's comments is provided in subtitles.

The clip has been viewed more than 9,000 times since Feb. 13, according to Google Video. It collected nine comments as of the writing of this story, including several that praise the sniping operation. It is one of dozens of videos depicting graphic, Anti-Western violence allegedly uploaded by the same user. A separate Google Video selection appears to show footage of US tanks and other vehicles being blown up by improvised explosive devices as they speed along Iraqi streets.

The video opens with a masked thug who enters a room, unloads rifles, hand guns, bullets and other implements onto a table, and then places his 37th tally mark onto a nearby wall. He then begins scrawling verses from the Koran in a journal. The video spends the rest of its time cutting between footage of the sniping and comments from the commander before returning to the man in the opening scene. He signs his name "Juba."

We were unable to reach Google representatives. The site provides a means for users to flag inappropriate material, and we think there is a reasonable chance the footage will be taken down once it comes to the attention of officials. The likelihood of new video with similarly appalling footage being uploaded is even better. ®