Updated In what might be described as a "Friendly Fire" incident, Microsoft software has identified a copy of Windows as a hostile operating system - belonging to enemy Apple forces.

It's not the first time Microsoft has incorrectly identified its own software - and shot it down.

Reader David Viner sends us this picture of the incident: 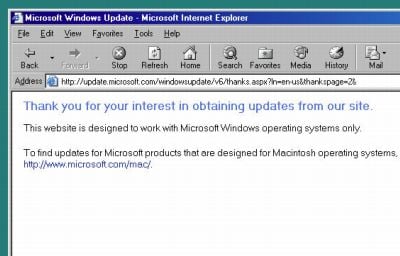 I downloaded the new MS Virtual PC 2007 freebie and tried it out using an old copy of Win98SE (which, according to MS, is a supported client OS). It all installed ok (despite me hosting it on XP Home and not Pro) and after about 30 minutes Win98 was up and running.

I then decided to try the Windows Update option from the Win98 Start menu but it bombed out after a few screens with one of MS's cryptic error numbers.

So I manually updated IE from version 5 to 6 (which I thought might prevent the Windows Update hiccup). However, now when I try to access the update site I get a message which suggests that MS thinks I'm running a Mac!!"

So what's really going on here?

Now, Virtual PC 2007 is a native x86 host. The product actually does officially support Windows 98, as this page confirms.

What we suspect is that the string that identifies the CPU hasn't been modified since the days of the PPC version. But then again, on the PPC edition, Windows identifies the virtual host CPU as er, a virtual Pentium Pro class chip. And it runs Software Update just fine.

Here's what Windows reports running on the PPC version on Virtual PC, on a Mac G5: 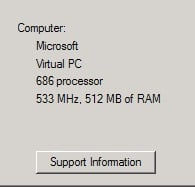 If any reader knows the Windows equivalent of uname -a - it could help clear up the mystery.

Microsoft seems to have enormous problems with old stuff in general. In the Comes anti-trust case, it emerged that two dozen libraries were shipping with Windows, for which Microsoft couldn't produce the source code.

Maybe the dog ate it?

Many readers are experiencing the same problems - without Virtual PC. "I've got a laptop in running the dreaded Windows ME that's kicking off because it thinks it's a Mac - brilliant!!" writes Louis.

"No matter what I tried, MS update wouldn't be convinced I was actually using an MS product. I suspect since MS now doesn't support win98 their web-based logic checks for all "supported" MS operating systems and by default the old IF/NOT/ELSE ELSEs to THEREFORE NOT MS so must be MAC. An 'honest' mistake to be sure, we all know that MS wouldn't do anything to force legacy users to upgrade {*wry grin*}

And the same happens with Win 98 SE.

Gareth says this workaround works: "I found that by changing the v6 in the address bar back to v4, the updates worked fine."

Thanks Ian, David and John.