Here we have a MP3 of Bergen the German Mountain Man's dulcet tones. Or perhaps you prefer Wild Will and Tough Tony.

Cleary, not the stuff of which dreams are made.

"Then you can get off with the other person without them knowing what you like," Machulis said. 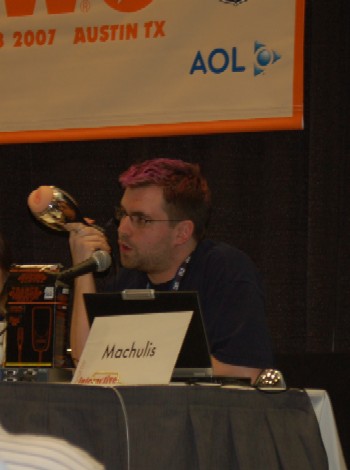 On a more clinical note, panelist and sex educator Cory Silverberg hopes that sex technology will advance to the point where scientists can study intercourse remotely with the help of sensors and feedback systems.

"Everything we know about how sex works is from a very small group of people who have sex in a lab," he said. "While this is good, it's also highly problematic."

The union of two people inside a MRI machine is a bit too forced for Silverberg's tastes. So, he's looking for people to go home, smack sensors all over their genitals and then go at it underneath the humming comfort of a wireless network.

"I can't even conceive of how much richer that information would be," he said.

The low point of came near the end of the panel when an audience member asked if we'll soon be banging our PCs. People love their cars and iPods, so why not cram your taco spreader into a USB drive, the fella wondered.

Machulis should know, as he's on the frontlines of the Sadville sex scene.

Apparently, this is all part of the "continuum of intimacy."

Brewer also advocated the idea of following cute people you see on the subway, if that helps you build a lasting fantasy. With any luck, your lustful gaze will turn into a vibrating text message one day.

And that, kids, is why we don't play the Emergency Alert System tone on TV
Bootnotes27 Jan 2023 |