Lego, Superman and the US Army

SXSW Technology conferences are not where you would normally expect to find the US Army scouting for new recruits, but sure enough, among the web developers and at SXSW Interactive, a lone officer stood handing out pamphlets from Uncle Sam's very own booth.

Doubtless the US Army will take anyone they can get, including pencil-armed techies, and it's pretty clear that SXSW isn't your everyday technology conference, so perhaps we shouldn't have as surprised as we were. 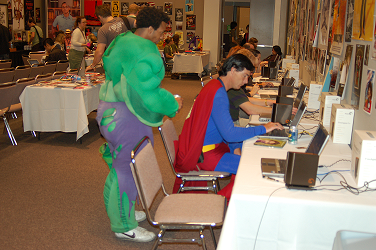 Your correspondents at the reporting coalface

It's the juxtapositions - guys dressed as Superman checking their email, IQ-heavy geeks playing with Lego - that make the Austin event the most bewildering mess it's been our pleasure to take part in. Among all such knowing Silicon Valley weirdness, a nomination for Kettering Borough Council from the UK in the Web Awards for "pushing the boundaries of CSS coding technology" raises a smile too.

The mix works well, and both sides were genuinely pleased to see each other. Sci-fi author Bruce Sterling commented in his show-closing "rant", a lame duck US administration makes for a stupid year, and online video is a stupid medium, so vive la SXSW 2007. 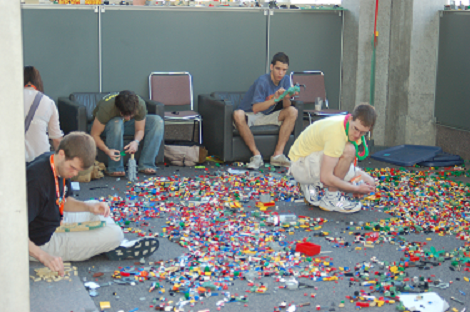 Some showgoers building the future of the web

Once the film and tech firms have melted away, only a few, like UK-based music site Last.fm are sticking around to cut deals with record companies. Austin is braced for the arrival of 12,000 hygiene-agnostic fans and more than 1,000 bands who will taking over the city's myriad venues from Thursday until Sunday.

It's a chaotic hipster oblivion which some locals have grown to resent despite the cash that pours into Austin's coffers. Take Reg reader and Austin resident Dillon, who writes: "I guess you know why I'm staying home next week. Some people love SXSW, and the city thinks it's great press. But for the great unwashed who didn't have the time to stand around waiting for wristbands (some of us actually work for a living), it's a royal pain."

Goodwill towards all the dollars raining down on Texas from Silicon Valley was not in short supply. Talk of Texan hospitality is a well-worn and often trite cliche, but anyone who's had to spend a day trudging around the 280,000 square metres of despair that is Hanover's CeBit, only to be presented with a tepid bratwurst lazily pushed into stale white bread, will appreciate the way they serve TexMex around these parts.

It helps for relations with the natives that, unlike the music festival, the tech conference is mostly confined to the Austin Convention Center, with keynotes from Dan Rather and Will Wright just across the street at the Hilton hotel. The Army booth was part of a teensy trade show which occupies a small but buzzing hall on the upper level.

The hard partying element of the conference is oversold: the vast majority weren't here for the parties, and if they were, they probably need to hit some better parties at home. And for all its gullible, navel-gazing, hype-swallowing ridiculousness, SXSW Interactive was a rare reminder that technology can still be fun. ®