Rackable Systems has signed on as a willing participant in the white trash data center movement.

CTOs everywhere can slap on their wife beaters, hop in a flatbed truck, and head over to Rackable's Milpitas headquarters to pick up a Concentro. Rackable's new system packs up to 1,200 two-socket servers into a standard 40' x 8' shipping container, giving customers a portable data center. Customers are expected to pick up such a design to work around space and power consumption issues.

Concentro appears near identical to Sun Microsystems' "Project Blackbox" data center in a container announced last year. The systems house enough horsepower to give you a top 200 supercomputer overnight, use water to keep the gear cool, and can be outfitted with a mix of server, storage, and networking hardware.

These white trash data centers might not be pretty, but they do seem practical for certain types of customers. Rackable and Sun have done their own engineering grunt work to make sure the portable data centers consume less power than a standard data center with AC and raised floors. Rackable, for example, expects customers to save about 80 per cent on data center cooling and power costs if they buy a Concentro.

The shipping container package makes it relatively easy for a customer to install the portable data center in an area with cheaper energy or to set up a data center in record time to meet rising demand. Both Rackable and Sun expect the military, large service providers, financial services companies, oil and gas firms, universities, and other demanding types to show interest in their new systems.

Rackable appears to have a horsepower edge over Sun for the moment.

It can fill Concentro with 1,200 1U servers or 600 2U servers. All of the systems are Rackable's half-height DC variety running on four-core Xeon chips from Intel. With two-socket servers, Rackable can reach 9,600 cores per container.

Sun, by contrast, can claim just 1,000 Opteron cores per container or 2,000 cores with servers based on its own eight-core UltraSPARC T1 chip.

But, in either case, you're talking about serious metal.

Beyond the servers, Rackable has tweaked Concentro in some nice ways. Administrators, for example, might be pleased to find an open 10 foot space at the front of the shipping container. According to Rackable, this area could be used to set up a workbench or to plop in some extra storage. Of course, you could imagine admins crafting a malt liquor bar or developing a mini-meth lab in the nook – whatever passes the time. 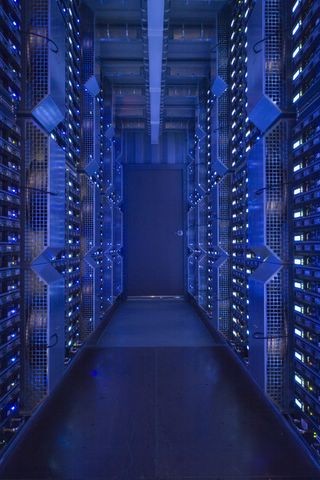 Rackable has also made it possible to remove all the individual server fans and use four large fans in the container for cooling. "That takes 23 kilowatts of power away right off the bat," said Conor Malone, a director at Rackable.

All told, the power consumption for Concentro runs about 750 watts per square foot.

Rackable has a second Concentro design in the works that will not require liquid cooling. It's looking at making a combined data center, power and cooling package available as well.

The company won't say how much a Concentro costs, claiming the customizable hardware options makes pricing tough to hand out to the press (reporters are very, very slow creatures). But, if you calculate the cost of 1,200 Rackable servers, you'll come close to the actual price.

One customer has apparently ordered a Concentro already. Sun too claims early orders for its Blackbox.

"Every week, I get the lead list (for Blackbox), and it's not shrinking," said Sun CEO Jonathan Schwartz, during a meeting last week with reporters. Schwartz added that a "big, brand name customer you will recognize" has ordered multiple Blackbox systems with other orders set to ship in six to eight weeks.

Skeptics, including the likes of IBM and HP, aren't moved by the white trash data centers. And we're curious about the concept as well.

Rackable, however, has no fears and sees customers lining up numerous Concentro systems side-by-side to solve their data center problems. Companies can throw a tarp over the containers to cut down on the sun's heat or stash the containers in a make shift building.

Power consumption, space, and specialized data center costs seem to be the hottest topics at the moment for customers with massive server needs. So, congratulations go to Rackable and Sun for crafting something to address these problems.

Our wife beaters go off to you. ®