Mr Screwpole gets warm and fuzzy about people...

Despite being left in a position of near-victory, Screwpole’s calamitous nephew Mugwort somehow failed to lead his project manager’s payment engine project into disaster.

Pleased with the way the manager saved his project from disaster, his bosses have handed him a bold new task, with a bulging new budget. The manager must now form an elite team and is planning his recruitment process…

You really have done it this time. You were in a prime position to send this pitiful excuse for a project manager into the depths of despair and straight to our hungry mouths – and yet still you failed! If it was up to me, you would be sent for immediate ‘Re-education’ but it would seem someone down here likes you – or rather doesn’t like me, given our association.

I will have to [grudgingly] continue in my attempts to improve you, Mugwort, not for my own ends, you understand, but, well, you know…

Anyway, it is fortuitous that I was planning to teach you about undermining human recruitment practices, seeing as your victim is now looking for highly-qualified programmers to be part of his elite development team.

Your very first task in this scenario, my deplorable relation, is to distance your project manager from the recruitment process. Successful project managers [and you should be flattered that I do not place yours in this category] try to take a hands-on approach to recruiting their team. Discourage thoughts like these and persuade him that he is far too busy to involve himself in something as ‘trivial’ as recruitment.

Next, oversee the creation of a non-technical recruitment team made up of the jaded, the ignorant and those with no vested interest in obtaining the best employees – in other words, Human Resources. It would be far more effective if technical candidates were judged by their peers, but yours will be evaluated by a glowering panel of embittered HR personnel who have only the vaguest idea of how to select people with the correct skills - and even less passion for the job.

Swamp this ill-suited, squabbling mass with thousands of inappropriate CVs and give them no screening criteria. CVs are unverified claims of success, Mugwort - two A4 pages of deception that job-hunters use to scam themselves into an office. These sheets of paper will be the key to recruiting the worst possible team you can.

Shrewd employers know that CVs are essentially worthless as early indicators of candidates’ appropriateness, and that some sort of filter test is so much more accurate and informative as a way to select the best candidates for interview. So instil in your recruitment team an unwavering belief in the sanctity of CVs. They should falsely assume that any exaggerated claims of technical ability are true, backed up by your ‘expert’ reassurances, of course.

At this point, it is vital you suppress any suggestions of evaluating candidates’ abilities in a manner representative of the job, as this would surely help to further weed out those who exaggerate their skills and highlight those with superior qualities – precisely the opposite of what we want. A ‘pretend’ evaluation for candidates, observed by a current member of the team, would make it plainly obvious to the recruitment group how a candidate would perform should they be employed; but you want to ensure this quality is unknown until candidates are taken on, by which time it will be too late. To this end, you will use the traditional unstructured interview as your only selection tool, which is far less efficient for appraising candidates.

For each day’s interviews, all potential candidates need to arrive at the office at the same time. They should be told that only half an hour of their time will be needed but in fact, you will make sure that each half-hour interview will overrun by some margin, forcing everyone – candidates and interviewers – to increasingly desire to get the entire circus over with and go home.

Meanwhile, interviews should be conducted in isolation from the rest of the office, so that interviewees gain no insight into the kind of environment in which they might be working and cannot interact with potential colleagues. Enlightening candidates on the company’s working practices and its staff would possibly help to win over the more expert candidates. Canny recruiters know that better candidates are likely to have several job offers and ‘selling’ the workplace may help sway them – we do not want those kinds of people, Mugwort.

Hand your recruitment team a selection of five generic questions to ask candidates during interviews, each unrelated and none bearing any relevance to their technical roles. Top this off with a single question of such bemusing nonsensicality, but apparently subtle complexity, that candidates will be sent into a panic. One of my favourites is “name your favourite cheese”. Give the impression that each answer carries an indication of their workplace demeanour [e.g. Brie = lazy sexual harasser; Wensleydale = fastidious neurotic; Roquefort = ‘nuff said], and get the selection panel to write their answers ominously on large clipboards, possibly with very serious looks on their faces. 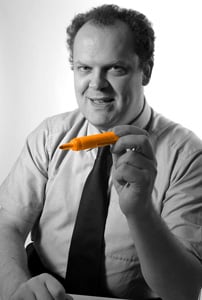 [A note should be made here about the size of the selection panel during interviews: make it inappropriately huge, with five or six people to every one candidate. No one on the panel will get to hear the candidate’s answers in depth as each of them will be fighting to ask the next ‘insightful’ question.]

At the end of the interview, have an ‘HR Rottweiler’ ready to barge in and grill the interviewees mercilessly, to pummel their insecurities and scream obscenities an inch from their faces. The aim is to either discourage the weak-willed candidates or force the more tenacious to take a massive cut in salary.

Finally Mugwort, disband the selection team as soon as the interviews are over and choose a solipsistic individual to decide which candidates will be sent job offers. Instead of putting candidate selections to a vote among a group of knowledgeable individuals, this single person will likely recruit people based on his or her own shallow criteria, resulting in team made up of, mostly, unsuitable workers. Heed my advice to the letter, Mugwort, to the very letter. By the time I’m next in contact, you should be ready to learn precisely how not to develop your new team.