Once 802.11g had established its popularity and plunge in price, WLAN equipment makers almost immediately began to tout non-standard technologies they promised would boost 802.11g's reach and data speed. Past reviews suggest they do, but you have to have the same technology at both ends of the connection. With a router, it's easy to see the speed-boost system's brand name on the box, but adaptors built into laptops are less readily identified.

Many notebooks are based on Intel's Centrino platform, and the chip giant has maintained a stern disapproval of such range-extending techniques, insisting instead on sticking to the standard. If you have a Centrino machine, you're never going to be able to take advantage of 802.11g enhancers, at least not without plugging in a second adaptor. 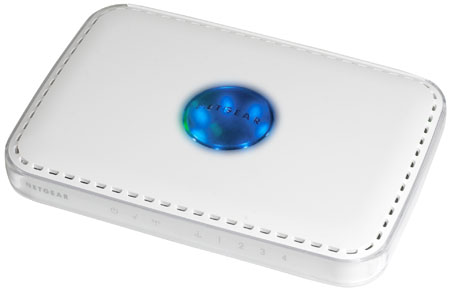 That said, some of these technologies also promise to improve the performance of standard 802.11g kit. Take Netgear's WPN824 RangeMax MIMO, for example, which uses speed-boosting technology and some tricks borrowed from 802.11n to boost range. I tried it and, yes, it improved the connection I got with my laptops' standard 802.11g adaptors. In the specific locations where connections would drop or simply fail to be initiated in the first place, my MacBook Pro could now pick a decent signal.

Not so a Dell Inspiron with a plug-in Linksys WPC54G PC Card. It proved resilient to the Netgear's signal boosting system. I also tried a Sony Vaio with an integrated Wi-Fi adaptor and, like the MacBook, it worked better. Which just goes to show how much better built-in antennae are over the tiny ones crammed into PC Cards.

The WPN824 costs around £90 to which you have to add the cost of one or more new PC Cards if you want to gain the full benefit. But it did improve regular 802.11g connections, and that makes it an attractive alternative to powerline range extenders. However, you may as well pay just a little extra and get a more advanced 802.11n set-up.

Last of all, I tried 802.11n, courtesy of Belkin's N1 Wireless Router and N1 Wireless USB Adaptor. Belkin prides itself on the consumer-friendliness of its kit, and the N1 router replaces the usual Ethernet, wireless and internet activity lights with more meaningful icons, including one to indicate the router has one of the various types of wireless security protocol activated. 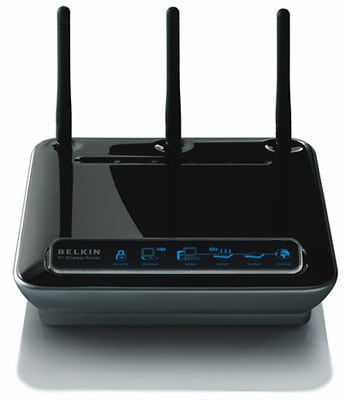 For me personally, the N1 was a less than ideal offering because none of the components come with Mac software. Apple does now offer laptops with 802.11n built in and as an optional extra for some desktops - though you have to pay an extra £1.25 for the software needed to enable it - but my MacBook Pro pre-dates the addition of the new WLAN technology, and as I've had my notebook for less than ten months I'm not likely to be upgrading any time soon.

The N1 router provides 802.11b/g connectivity as well as 802.11n, so at least the MacBook Pro could connect to it that way while my Vaio was running the new network technology. Once you've upgraded your clients you can flip the switch in the router's admin page to 802.11n only, but not in the 5GHz band.

If you're a Mac user, there's currently only one way to connect to an 802.11n network: buy a new computer and then pay Apple an extra $2/£1.25 for the software you need to enable 802.11n on your machine. This is a disgrace, I'd argue, but what's worse is the unwillingness of networking kit vendors to capitalise upon it. None of the ones I spoke to plan to offer Mac drives for their PC Card and USB adaptors, even though these devices could be used to connect older Macs to these vendors' routers.

One ray of hope is US software developer OrangeWare, which has been offering Mac drivers for a variety of PC Card and PCI add-in Wi-Fi adaptors for some time. The downside is there's no 802.11n support yet, and OrangeWare hasn't updated the code for over a year - not a good sign. The company didn't respond to my requests for a clarification of its update plans.

CWU: Just like UK government did a reverse-ferret on tax, so will national telecom titan on staff pay
Networks6 Oct 2022 | 7