Games within a game

Such was my first session of role-play in Second Life. It happened in Midian City, a dystopian RP sim that I once described as Grand Guignol informed by Blade Runner and Doom. It is, in my opinion, one of the most beautiful sims in all of SL: pure dystopian urban decadence - assuming you like that sort of thing, as I do very much. Predators lurk in its decaying alleys, overhead catwalks, and sewers. Victims flit nervously about, waiting to be taken. Fighting between factions (sometimes involving major street battles), kidnap, gang rape and torture, all figure into the RP. Whether you prefer to be a victim or a predator, there is a lot of play to be enjoyed at Midian. Indeed, merely wandering about as a visitor is satisfying, because the place really is beautiful. 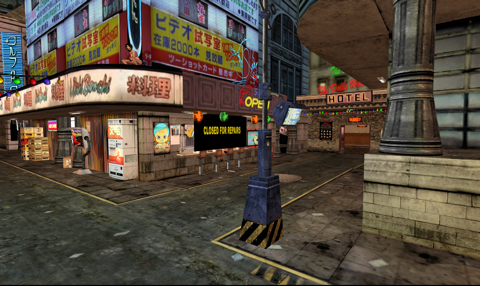 That's but one example of the myriad opportunities for role-play in Second life; in this column, we'll explore a small sample of RP sims that I hope will give readers a sense of the possibilities. This is not a survey; it's really just a selection illustrating the variety of RP available.

Of course, SL wasn't designed for role-play (or was rather carelessly designed). It's certainly not a dedicated RP environment like World of Warcraft, nor can it be. There are serious scaling problems, so that a sim with 25-30 people is overcrowded and laggy, and one with 45-50 is destined to crash after a painful period of near-immobility for everyone there.

However, SL is relatively open and flexible; admittedly, it's not an ideal RP environment - at least in the sense that its scaling issues prevent large groups from playing together - but it does enable creative residents to design and build their sims from the ground up. So what RP in Second Life lacks in population density, it makes up with flexibility and its by-product, variety. And this is good if you're a bit of a dilettante role-player. No doubt there is much to be said for developing a character over time and becoming something of an expert; but perhaps you prefer not to be stuck in a particular role, in a particular environment. In that case, you'll probably find a few RP communities to your liking in SL.

All nerds report to the holodeck immediately

For an RP about as far from Midian City as one can get, and a good illustration of the variety SL is capable of supporting, consider the Galaxy sim, where role-play centres on the comparatively sterile, rationalistic world of Star Trek.

Now, I know what you're thinking: "Star Trek! Ugh, that's for total nerds". Oh, but that is so wrong. Trek is a significant milestone in the history of television entertainment, and here's why:

Think, for a moment, of what American TV viewers were watching in 1966, when Star Trek appeared. Frontier sagas and Westerns dominated. Even the supposed "sci-fi" series Lost in Space was merely an American frontier saga clothed in 21st Century trappings.

Post-war American narcissism was approaching its climax through television. Here was this marvellous new invention, but Americans used it to look within and backward. Fascinated not by the possibilities of a fresh technology, but instead by their own myths of origin, Americans, incredibly, spent much of their TV time immersed in the 19th Century: Gunsmoke, Rawhide, Maverick, The Rifleman, Cheyenne, Bonanza, The Virginian, The Lone Ranger, Death Valley Days, Wagon Train, and scores of similar series. For a good quarter century, the TV Western reigned supreme.

And then there was Trek. It marked the moment when American TV dared to look outside, and forward. It had a detailed back story; it had a consistent world view; and it proposed social values sometimes in disagreement with the prevailing culture from which it emerged. In television's repetitive universe of an American foundation fantasy, Trek was truly revolutionary: it was, literally, a history of the future.