And the centre of your desktop is...

The poll results are in

Reg Reader Workshop Well, if ever there was any doubt that what's going on with the desktop is a hot topic among IT professionals, put it to one side. We had an overwhelming response to our reader poll in this area with over 4,800 of you participating, so thanks to those who took the time.

The first thing we learned from the poll was that Microsoft Office still rules the desktop when it comes to office suites, and basically there are no significant commercial challengers. The only competition at the moment is from open source office suites, OpenOffice in particular, which around one in five Reg readers are personally using. 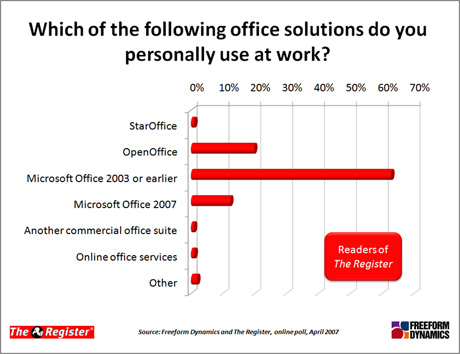 The other big news from this chart is that online alternatives to desktop office suites delivered via the "software as a service" (SaaS) model are really nowhere at the moment in terms of penetration, at least for business use. With all the noise we hear about these types of services, this may come as a bit of a disappointment for SaaS and Web 2.0 advocates. Clearly, the tales that Google is already beginning to threaten Microsoft's desktop dominance are wildly exaggerated.

Something we need to be aware of when looking at the above picture is that the highly discerning and tech savvy Reg readership is not necessarily fully representative of the business user population as a whole. During the poll, we therefore asked you to tell us about what was going on across your organisation in general, which gives us a more accurate view of the bigger picture. 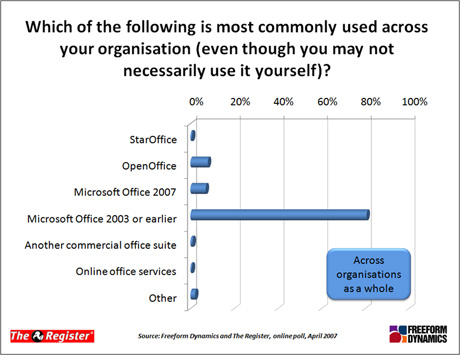 What we notice here is that open source office suites have not penetrated as much across the broader business user community, and indeed if we break this out by company size, we can see that even the leading open source solution, OpenOffice, is not really being used to any significant degree in medium sized and larger organisations, and has, in fact, already been outpaced by Microsoft's latest release, Office System 2007 in this space. 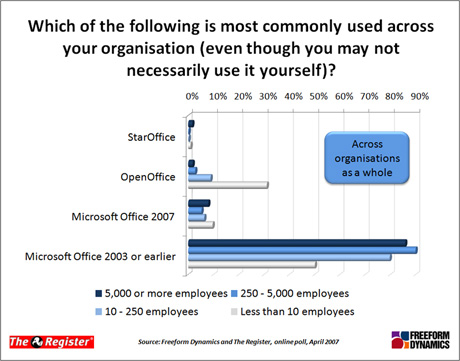 We must again take into account the demographics of the Reg readership when looking at this, in particular the fact that readers from smaller organisations tend to be skewed towards the IT industry – small IT service firms, resellers, independent consultants, contractors, and so on. While we cannot tell directly from this data, the suspicion would be that penetration of open source office solutions among the broader base of small businesses outside of the IT sector would look quite a bit different.