The rubber keyboard that saved Britain

Clive Sinclair's ZX Spectrum is a quarter of a century old today. The machine that really launched the UK IT industry hit the streets of a depressed Britain on 23 April, 1982. 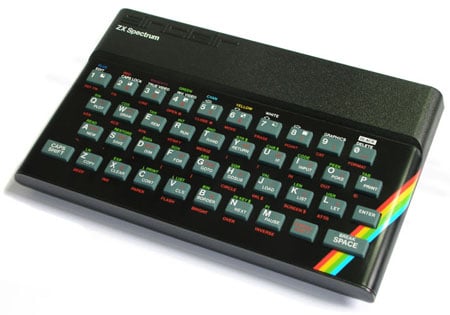 The Falklands War was properly kicking off, skirt-bothering Europhiles Bucks Fizz were number one with their unforgettable hit My Camera Never Lies [no, us either], and new romantic coal miners were using yellowed ration books as makeshift lavatory paper while they waited in million-strong lines for their Giro - if they weren't being beaten up by skinheads.

Dark days, then. But lo, along came bespectacled Messiah Sir Clive Sinclair with the successor to his 1981 release, the black-and-white ZX-81 [see what he did there?]. The ZX Spectrum boasted a visual cortex-melting eight colours at 256 x 192 resolution, blistering 3.5MHz CPU, and crucially, a crisp-repelling vulcanised rubber keyboard.

It gave a nation of spods a good reason not to go outside, paving the way for a generation UK IT triumphs, like the National Programme for IT.

Unfortunately for Sir Clive, his subsequent adventures in personal transport, wristwatch radios, and professional poker didn't redefine paradigms in quite the same way.

For a trip down memory lane - or for those under 30, to laugh with youthful conceit at the pathetic puniness of early home computers - you could do worse than visit worldofspectrum for archives, forums and emulators.

Share your memories of wasted joyous youth below, in the comments section. ®