Tripping up the light fantastic

Optical links are not as secure as might be assumed. Techniques for extracting data flowing over fibre optic links are evolving to make the technique easier to apply.

Instead of breaking a fibre and installing a device (splicing), an approach that might easily be detected, off-the shelf equipment makes it possible to extract data from an optical link without breaking a connection.

A simple clip-on device - such as the FCD-10B bend coupler from Canadian firm Exfo - is enough to achieve the job. 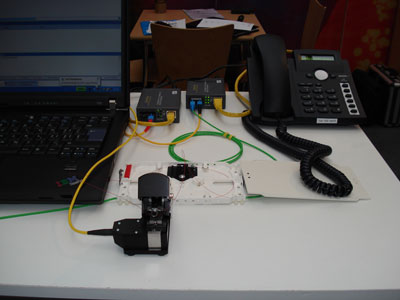 At the Infosecurity show in London, Swiss encryption appliance firm Infoguard demonstrated the use of optical tapping to intercept a Voice over IP call travelling across an optical link (picture above). There was no noise on the line while the tap was in progress. A PC connected to the optical link via a media recorder was able to recover the unencrypted data flowing over the link.

The scenario of optical hacking might appear like the fodder from Hollywood hacksploitation flicks rather than a practical threat. However, Infoguard said that in 2003 an illegal eavesdropping device was found attached to Verizon's network. Investigators probing the hack reckoned it was motivated by an attempt to access the quarterly statements of a mutual fund company. The perps were never identified.

Infoguard staged the demo in order to illustrate the point that firms need to encrypt data traveling over optical links, using devices such as its 10Gbps EtherGuard appliances. ®