Astronomers have discovered the most Earth-like exoplanet yet. The world, which orbits a red dwarf star, is about five times as massive as Earth, and thanks to its position, should be capable of holding liquid water.

The researchers made the discovery using the 3.6 metre telescope at the European Southern Observatory in Chile. 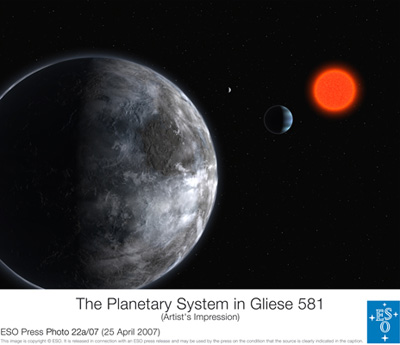 The planet, the smallest yet discovered, orbits the red dwarf Gliese 581 at a distance one fourteenth of that from Earth to the sun; its year is just 13 days long. However, because the star is so much cooler and less luminous than our own sun, the so-called habitable zone, where planets can carry liquid water, is much nearer the star.

"We have estimated that the mean temperature of this super-Earth lies between 0 and 40 degrees Celsius, and water would thus be liquid," explains Stéphane Udry, from the Geneva Observatory and lead author of the paper, submitted as a letter to the editor of Astronomy and Astrophysics.

"Moreover...models predict that the planet should be either rocky - like our Earth - or fully covered with oceans."

The team has already identified a Neptune-sized planet in an even tighter orbit of Gliese 581, and with the data they have now, they think there is reason to assume that a there is a third world - probably eight times Earth's mass - in the extra-solar system. This circles the star much further out, but still close to the star by our standards, with a year of around 84 days.

The team making the discoveries used the HARPS (High Accuracy Radial Velocity for Planetary Searcher), perhaps the most precise spectrograph in the world. It can spot signals - variations in the velocity of a star - that fall far below the "noise" threshold of most spectrographs.

ESO says it holds several records for discoveries of extra solar planets, and is used mainly to hunt for the lower mass objects that would not be easily found otherwise.

You can read the paper, The HARPS search for southern extra-solar planets: XI. An habitable super-Earth (5 MEarth) in a 3-planet system, by S Udry et al, here (pdf). ®