Moving light past all those synapses

It is an old question: how does light make its way through all the retinal layers to finally strike the light sensitive cells at the back of the eye?

A group of researchers at the Paul-Flechsig-Institute of Brain Research, Universität Leipzig in Germany, thinks it has the answer. They have demonstrated that light is collected and funnelled through long cells called Müller cells. These work almost exactly like a fibre optic plate: a "zero-length window" that optical engineers can use to transmit an image without using a lens.

"Light has to go through all retinal layers to get to the photosensitive cells. This is not a problem for the octopus or the starfish which both have different eye structures. But it is a problem for all vertebrates," explains Andreas Reichenbach, who worked on the research.

"The layers in front of the rods and cones act as a diffusing screen. They have a half micron diameter which is roughly the same as the incoming light, so there must be lots of scattering. So we thought, could there be a way round this?

"We put unstained, living tissue on a microscope and focused through the layers. We found lots of light reflecting in synaptic and nerve layers, but with regular patterns of empty holes with no scattering." 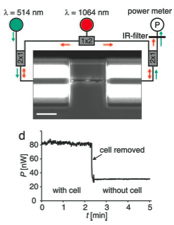 The team then built up a cross section of the eye and found that the holes were in fact tubes, running all the way through. They were able to confirm that these were the Müller cells by running tests with lasers.

"Everyone thinks lasers are perfectly parallel, but this is not so," Reichenbach continues. "They do diverge. The Müller cells behave as a lens, and collect all the light without any loss, just like an optical plate."

But normal optical plates have simple bundles of optical fibres that collect and transmit the light. The researchers have discovered that the vertebrate eye has gone one step further and created a funnel shaped cell that allows more light to be collected at the surface of the eye.

The discovery doesn't have any direct medical applications, but it could pave the way for dramatic improvements in various pieces of sensing equipment.

"Nature is so clever," Reichenbach says. "This means there is enough room in the eye for all the neurons and synapses and so on, but still the müller cells can capture and transmit as much light as possible."

If the technique could be replicated with optical plates, it could mean engineers would be able to fit more into delicate sensors. "They could include lots of other things - computing elements for example," he adds.

The research, entitled "Müller cells are living optical fibers in the vertebrate retina" is published in the 30 April edition of the Proceedings of the National Academy of Sciences (PNAS). ®